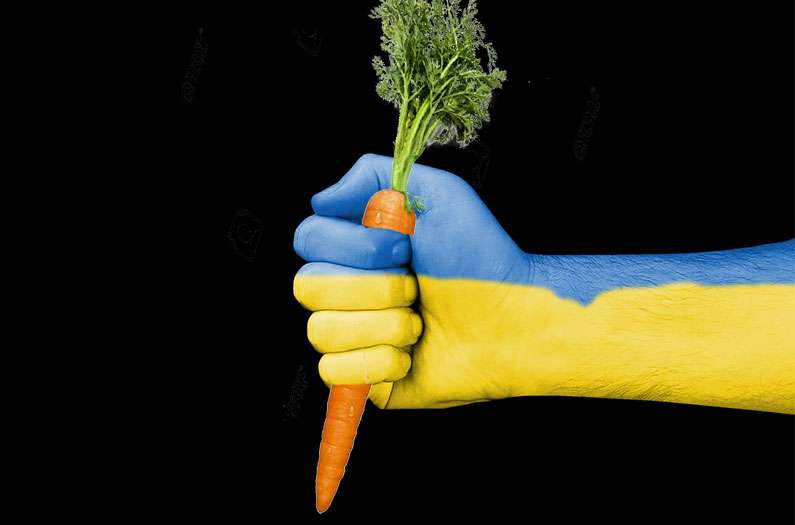 A new study finds that shifting away from meat, dairy, and sugar would release tons of crops for other uses—replacing almost all crop exports from Ukraine and Russia.
By Emma Bryce
November 25, 2022

If diets shifted away from meat and towards plant-based foods across the European Union and the UK, those countries would suddenly have enough spare crops to make up for the massive shortfalls in exports caused by the war in Ukraine, a new study finds.

Known as Europe’s breadbasket, together with Russia Ukraine usually provides generous exports of sunflower oil, wheat, barley, and other grains to the rest of the world. This has a crucial role to play in feeding people, but also indirectly as feed for livestock: in fact 60% of the crops usually exported from Ukraine and Russia end up feeding European cows, chickens and pigs.

But this convenient system of exports and imports was thrown into disarray by Russia’s invasion of Ukraine, causing food instability in trading nations, with ripple effects across the globe.

Specifically, they looked at the effects of the EU and the UK transitioning to the EAT-Lancet diet: this globally-recommended menu downplays higher-footprint animal-based products like meat and dairy, as well as unhealthy levels of sugar consumption, in favor of plant-based foods.

Remarkably, they found that if Europe switched to this recommended diet, almost all crop exports from Ukraine and Russia could be replaced by the sudden glut that would be available.

That’s because the shift away from meat, dairy and sugar would release tons of crops for other uses. European meat consumption, particularly, is above the per capita global average, and livestock raised to sate this appetite guzzle a huge share of exported grain. Therefore, significantly reducing the amount of livestock in accordance with the new diet would create an excess of grain.

In fact, these ‘leftover’ crops would be more than enough to plug the hole left by almost all Ukrainian-Russian crop exports. For instance, dietary shifts in the EU and UK would save 20.2 Mt of wheat, which would be enough to cover the 19.4 Mt wheat exports from Ukraine and Russia. The same is true for sugar consumption, which would decline enough in the new diet to preclude the need for exports from Ukraine and Russia.

Dietary change would also reduce UK and EU fertilizer use in croplands by 23.4% (accounting for 2.1% of global use) which would help offset disrupted fertilizer exports from Russia, a major global source.

Meanwhile, changing diets would also free up 70.7 Mha of agricultural land—the combined area of France and the UK—as declining livestock numbers would no longer need as much pasture and cropland to rear and feed them.

This, the researchers saw as a further opportunity to buffer countries against food system shocks. Devoting just 25% of that newly-freed land to growing crops could go beyond exports to replace the total crop production of Ukraine and Russia overall, the researchers calculate. That would bring benefits for domestic consumption and food availability for other countries that receive imports from Ukraine and Russia, too.

What’s more, it could bring big environmental benefits. If all the freed land was returned to nature, emissions associated with food production would reduce by 0.25 Gt of CO2-equivalent per year, and water consumption by 7.9 billion cubic meters. Plus, an estimated 38.3 Gt of CO2-equivalent could be stored in the ground as land recovered over the long term.

The study’s key takeaway? Not eating so much meat, and having a healthier overall diet, could have helped insulate global food systems from the effects of war—with environmental benefits, to boot.

“Even lower participation rates in planetary diet adoption can make a large difference,” the researchers say. If the EU and UK reduced meat consumption by 20%, or roughly half its citizens started eating less meat, that would still be enough to replace most exported crops from Ukraine and Russia, they found.

With several threats to our food systems—Covid, conflict, and climate change—seemingly ramping up, there’s real urgency to start taking even incremental steps towards sustainable food systems, the researchers say. “It’s better to make these changes today, rather than waiting until nature makes the decision for us and the damage is already done.”