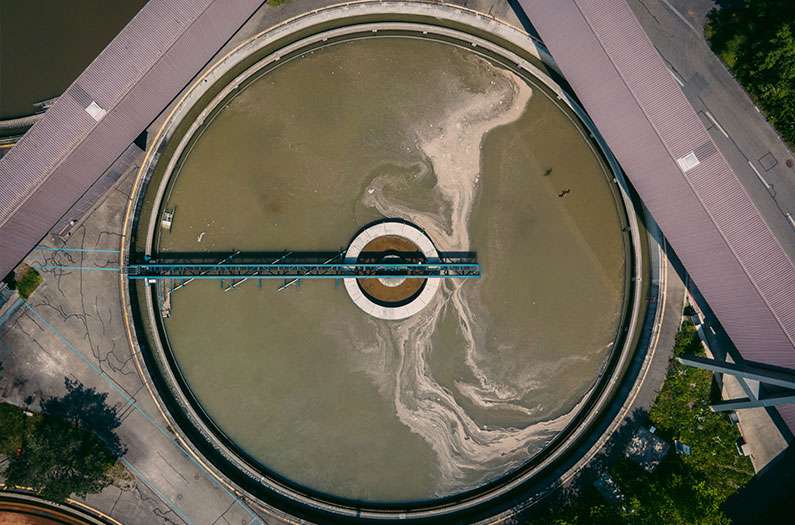 It may be grim to think about, but sewage is rich in a substance that’s critical for growing food. Ammonia is a valuable core ingredient in fertilizer—but in cities it conversely becomes a cost, as it must be removed from sewage water in expensive treatment plants, to stop it leaching into the surrounding environment.

Now researchers find that a technology called ‘air-stripping’ can tackle both these challenges—cleaning wastewater of ammonia, and repurposing it as fertilizer—and all using far less energy at a lower cost than the regular method.

That regular method is the Haber-Bosch process, a revolutionary invention that underpins most of the synthetic fertilizer manufactured for agriculture today. But, this process guzzles up huge amounts of energy, and has a large emissions footprint.

What’s more, all this cost goes into synthesizing a nutrient that’s already naturally abundant in our waste—which itself is a wasted opportunity.

What’s needed are methods to extract ammonia from sewage, and while a few do exist, it’s unclear how well these can compete with conventional fertilizer production.

The researchers decided to look at one of these promising alternative methods that’s used in some wastewater treatment facilities—air-stripping—to try and answer this question. The process works by heating up wastewater, to release ammonia as a gas that’s captured in the system and is then ‘stripped’ or gathered from the air in a concentrated form called ammonia sulfate that’s added to fertilizer.

The researchers carried out a lifecycle analysis on this process, comparing it with the Haber-Bosch method, to determine its footprint. They relied primarily on data from a water treatment facility in the US city of Philadelphia, and looked at everything from the cost and impact of installing the technology where it doesn’t exist, to the energy required to heat the water, as well as the costs of transport and storage. They also factored in the costs of marketing the extracted ammonia, to compare its economical viability to fertilizer made using the Haber-Bosch process.

What they found suggests we’ve really been missing a trick by letting ammonia disappear as waste in sewage streams. In the first instance, the life cycle analysis revealed that air stripping produces 5 to 10 times less in the way of greenhouse gas emissions than the Haber-Bosch process, making it a greener option by far.

This makes sense considering the energy-intensiveness of the Haber-Bosch process—requiring up to 15 times more energy to produce ammonia than air-stripping does. The energy footprint of air-stripping could be shrunken further if renewable energy sources were used, the researchers say.

Ammonia sulfate is priced at around $0.640 per kilo on US farms. But the selling price from air stripping needs to be just $0.046 in order to break even of the production costs. That’s 92% lower than farm prices, which therefore leaves a large margin for profit-making, making this a potentially very attractive fertilizer source.

One caveat with these findings is that air-stripping can’t necessarily compete with the rate of ammonia sulfate from the Haber-Bosch method. Compared to the industrial volumes produced at controlled fertilizer production facilities, air-stripping by comparison generates ammonia on much smaller scales.

However, the point isn’t to replace Haber-Bosch, the researchers explain, but rather to find alternatives to this high-intensity process that can help ease its pressure on the planet. Air-stripping provides one very appealing and economical option for doing that.

Added to this, are the clear cost and environmental benefits of removing ammonia from wastewater, which could help ease pressure on treatment plants, and reduce the risk of polluting water bodies and soils, they say.

Producing this important resource at points scattered across cities would also decentralize fertilizer production—helping avoid the threats to supply we’ve seen recently as a result of Russia’s war in Ukraine.

Circular approaches like these could build up our resilience for an uncertain future. And at the end of the day—although it might give us the ick—our waste is a resource that’s too good to waste.

Photo by Patrick Federi on Unsplash