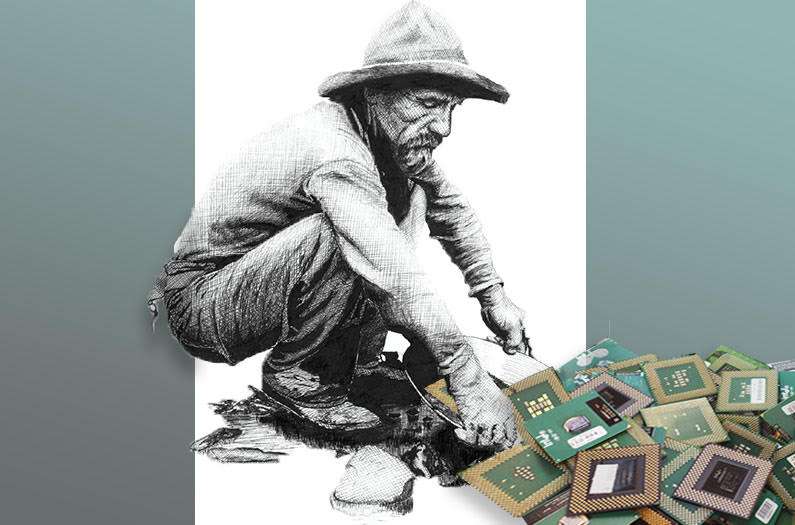 In a first, researchers assessed the kinds of electronics that will be discarded in the future and the materials they contain to see how a national e-waste recycling strategy might pan out.
By Sarah DeWeerdt
December 6, 2022

In order to make that happen, planners need to know what kinds of electronics are likely to be discarded in the future, how much of what materials they contain, and where they will be coming from. Those are tough questions to answer because consumer electronics are changing so fast. But Peng and Shehabi took a first stab at calculating the potential for e-waste recycling in a comprehensive, nationwide way.

They used historical sales data and the predicted lifespan of more than 90 consumer electronic products to estimate future trends in what people will throw away. They also calculated the potential value of the materials those discarded electronics will contain.

“Since previous analyses showed that gold holds most of the metallic value (up to or higher than 80%) in waste electronics, in this analysis we use gold as the primary indicator to examine the economic potential” of e-waste recycling, the researchers explain.

Recommended Reading:
How We Think about E-Waste Is in Need of Repair

If electronics sales grow at a rapid clip there could be 1 billion electronic devices weighing 1.5 million tonnes discarded in the United States in 2033, the researchers found. Even if sales grow more slowly, would be 700 million devices and 1.2 million tonnes of e-waste will be discarded a decade from now.

Electronics are becoming smaller and more complex, which means that they contain more gold (and likely other valuable materials) per unit weight than in the past. In fact, more than 100 tonnes of gold might be recoverable from electronics discarded in 2033, which amounts to roughly half the current U.S. annual gold production of 220 tonnes.

All of that could be good news for the profitability of e-waste recycling—if recycling facilities can be sited in an efficient way.

Ownership of electronic devices, and therefore generation of e-waste, is densest in heavily populated coastal and metropolitan areas. In some areas of New York City and Los Angeles, “over 160,000 kg of waste electronics could be generated annually within one square kilometre,” the researchers say.

Meanwhile, mining and refining of new metals mostly takes place in the western and mountain states, especially Nevada, Alaska, Arizona, Utah, and Colorado. In the western part of the country, e-waste recycling facilities could potentially be integrated with operations that refine newly mined metals because both processes involve many of the same techniques.

In the central and eastern part of the country, meanwhile, there’s more potential for standalone e-waste recycling infrastructure. Some of these new recycling facilities might be able to incorporate new technologies that are being developed to recover metals from e-waste.

Image: ©Anthropocene Magazine (based on drawing by Tony Oliver via wikimedia)