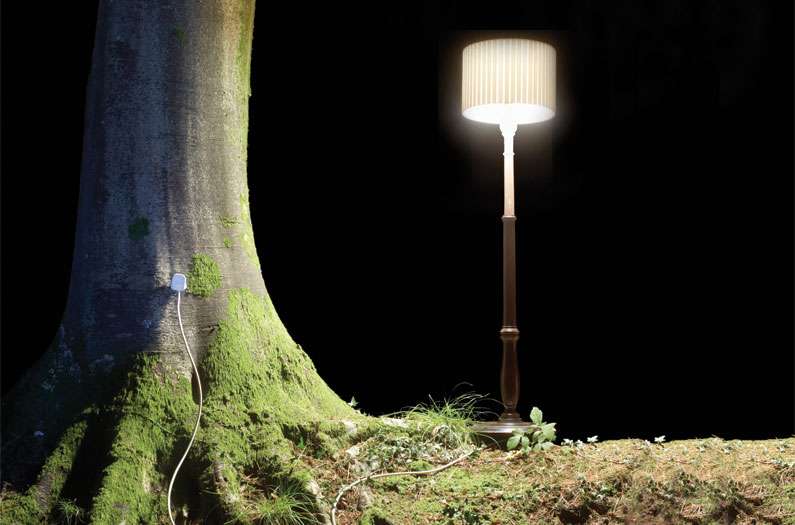 With a simple one-step treatment that changes the nanostructure of wood, researchers have boosted the electricity it produces when wet--enough to light up LEDs and even laptops
By Prachi Patel
December 15, 2022

Wood is a well-known insulator: it does not let current or heat flow through easily. But when wet, it can conduct electricity because of water and the dissolved minerals and salt it contains. And now, researchers report a simple chemical route to change the microscopic structure of wood and boost the electricity it produces when wet.

The amount of electricity is still small, but enough to run LED lights or a calculator. Using larger pieces of wood or connecting multiple smaller devices could produce enough power for a laptop, said Yuanyuan Li, a professor in the Department of Fiber and Polymer Technology at KTH Royal Institute of Technology in Sweden.

“If we wanted to power a laptop, we would need about one square meter of wood about one centimeter thick, and about two liters of water,” she said in a press release.

The concept is called hydrovoltaic energy. “A big issue with hydrovoltaic energy harvesting from organic materials is the extremely low power output [with] which it is difficult to power practical devices,” says Jonas Garemark, a doctoral student and co-author of the work published in Advanced Functional Materials. “In our work, we can reach microwatts per square centimeter, which provides useful power outputs.”

Natural wood contains long, empty channels called lumen that conduct water. These channels can be micrometers to millimeters wide. There has been a lot of research on nanoengineering wood to change its chemical makeup and nanostructure, which impart unique properties such as elasticity,  pliability and transparency. But, says Garemark, “no one has so far attempted to utilize the empty spaces within natural wood.”

The KTH researchers decided to fill these voids with even smaller porous structures. The thought was that this would speed up the flow of water through the structure and increase the effective surface area between water and wood.

Making the efficient wood-based generator involved a one-step chemical treatment. The researchers immersed a piece of balsa wood in a water-sodium hydroxide solution for 48 hours at –6°C. This causes the cell walls in wood to partly break apart, causing a dense jumble of tiny cellulose fibers to collect in the lumen.

The dense network of fibers creates many smaller pores, which boosts water uptake and surface area charge, just as the researchers predicted. Their measurements showed that the modified wood produced 10 times more electricity than natural wood when soaked in pure water.

Until now, researchers have most commonly used materials such as graphene, carbon black or porous metal oxides for hydrovoltaic energy harvesting, Garemark says. All these require a lot of energy to prepare.

The new wood-based generator is a low-cost, sustainable alternative for low-power devices. “This material is made completely from wood, and the preparation requires only one single step following green chemistry principles,” he says. Plus, this is just the beginning for hydrovoltaic energy harvesting from wood. “This is a relatively new topic and there are many exciting possibilities that has not been explored yet.”