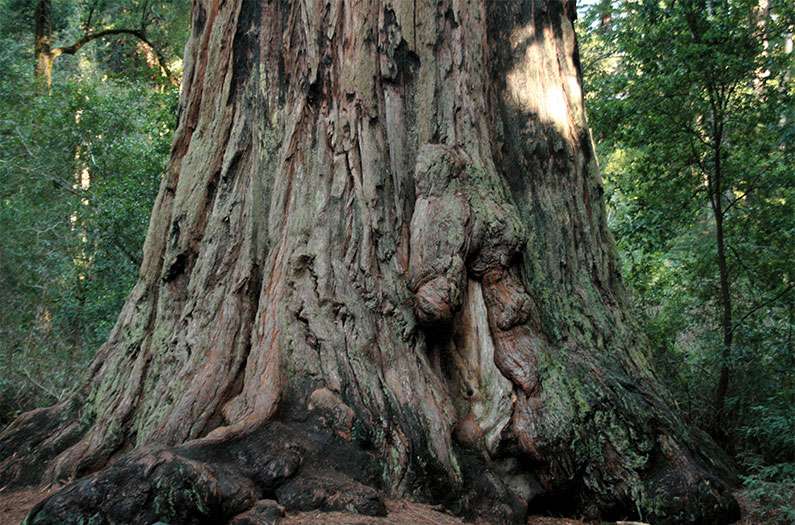 Tree rings from 22,000 trees around the world reveal that old-growth trees keep growing and sucking up carbon more than younger trees during a drought.
By Warren Cornwall
December 7, 2022

Sometimes old age and gritty stamina trumps youth and resilience. It’s true for people. It turns out it’s true for trees as well.

Old-growth trees can endure the battering of a drought better than their younger counterparts, scientists have learned. In the face of increasingly frequent and more intense droughts fueled by climate change, the new research underscores the importance of ancient trees to sustain forests.

“Given their high resistance to drought and their exceptional carbon storage capacity, conservation of older trees in the upper canopy should be the top priority from a climate mitigation perspective,” said forest ecologist Tsun Fung Au, a postdoctoral researcher at the University of Michigan who helped lead the work.

As the world gets hotter, forests are getting younger as trees regrow in places once cleared for farming, timber and other uses. By one estimate, young forests cover nearly double the area of old-growth forests around the world, 26 million square kilometers to 16.5 million.

That raises questions about how these demographic shifts might influence the ability of forests to withstand the pressures of climatic events such as droughts. Forests in the southwest U.S., for example, are currently in the grip of the worst drought of at least the last 1200 years.

Such droughts can be lethal for trees, causing their vasculature to collapse or weakening their ability to withstand pests and diseases. In one study of California forests, as many as half the trees in some places died during the drought that ran from 2012 to 2015.

Au wanted to know how the demographics of forests might shape their fate in the face of such pressures. He and researchers at universities in the U.S., China and France turned to tree rings. Because trees go through annual growth cycles, they add new wood in yearly rings. The history of each tree’s year is written in those rings. A thinner ring can indicate the tree literally had a lean year, growing less. Add up all the rings, and you know how old a tree is.

To get a global view, they tapped into the International Tree-Ring Data Bank. They looked at tree ring widths from nearly 22,000 individual trees spanning five continents and representing 119 drought-sensitive species.

The rings revealed that younger trees experienced bigger drops in growth during droughts. The effect was biggest with deciduous hardwood trees. When droughts occurred, the youngest 25% of the deciduous trees experienced a 28% decrease in their growth, on average. By comparison, growth in the oldest trees declined by 21% compared to non-drought years. The effect was even more pronounced during extreme droughts, when the youngest deciduous trees’ growth fell 17% more than their oldest counterparts, the scientists reported December 1 in Nature Climate Change.

While the difference was less dramatic among conifers, the youngest ones still experienced a 2.5% bigger loss of growth during drought years.

The results varied somewhat depending on the type of forest. Deciduous trees in moderately dry forest—such as the forests found in much of California, as well as damp forests—such as the ones that cover much of Canada and Russia—were the most sensitive. The young conifers might have experienced less of a growth gap because they are found in more arid climates, so they are better adapted to those conditions.

The scientists suspect part of the age advantage could come from having bigger root systems that can tap into water more effectively. The older trees might also produce more cooling shade, potentially reducing drying in their immediate area.

The decline in tree growth during a drought can have major implications for both the forest and the climate. The 2003 drought in Europe, for instance, temporarily caused ecosystems there to release more carbon than they absorbed. At a global scale, the effects of younger trees growing more slowly during droughts “could have huge impacts on the regional carbon storage and the global carbon budget,” the scientists wrote.

But before us older folks gloat too much about the toughness of the elders, youth does have advantages.  Twenty-something athletes can swiftly bounce back after a grueling soccer match. Likewise, the young trees that survived the drought usually recovered faster, returning more quickly to their normal growth rates once a drought ended.

This means there could be a silver lining to the story. As these younger forests age, the trees that do make it could be better able to cope with droughts and return to growing faster—and soaking up more carbon – when the rains return.