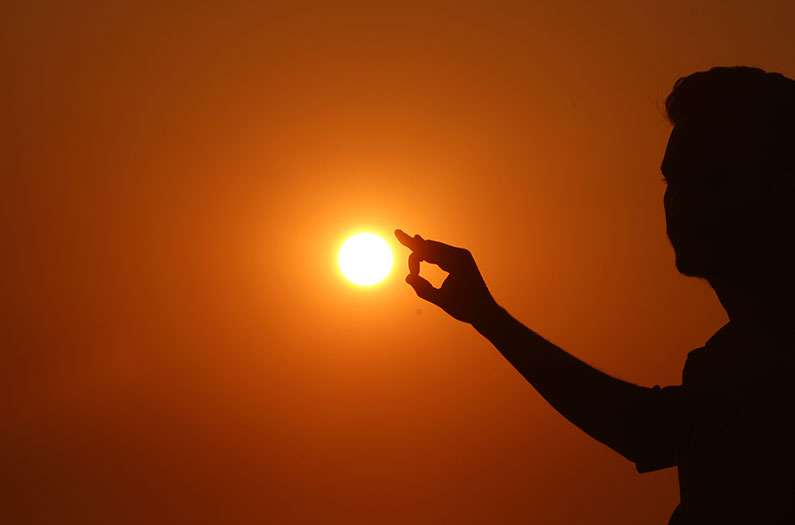 Engineers have made a device one-hundredth the size of previous solar-to-hydrogen devices that is over three times more efficient
By Prachi Patel
January 19, 2023

Using sunlight to split water into hydrogen and oxygen is the most environmentally friendly way to produce zero-emission hydrogen fuel for cars, trucks, and ships. A new solar-powered device reported in the journal Nature can do this water-splitting much more efficiently than methods reported so far.

The device, which is one-hundredth the size of previous ones, promises to slash the cost of solar hydrogen and offers a practical path to producing hydrogen from both freshwater and salty water. “The main challenge we tried to address is to overcome the efficiency bottleneck of hydrogen production directly from sunlight and fresh- or sea-water,” says Zetian Mi, a professor of electrical and computer engineering at the University of Michigan who led the work.

Plants are excellent at absorbing sunlight and using its energy to split water. Scientists have been trying to mimic photosynthesis to make hydrogen fuel from water using different techniques. One relies on special semiconductor materials that absorb sunlight and produce electricity to split water in a battery-like electrochemical cell. But those need corrosive electrolytes that are not environmentally benign. 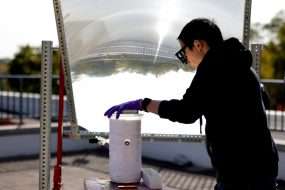 A more direct approach is to use semiconductor catalysts that trigger a water-splitting reaction when they are energized by the sun. But the solar-to-hydrogen efficiencies of such photocatalytic systems have been pretty low so far, with the best reaching just below 3 percent.

Mi and his colleagues found a way to boost this efficiency via two pathways. One was to use concentrated sunlight. The other was to harness higher-wavelength visible light and heat-producing infrared light that is usually wasted by conventional catalysts.

The key advance that lets them harvest more sunlight is the catalyst they use: nanowires of indium gallium nitride grown on a silicon wafer. Unlike traditional catalysts, which break down under concentrated sunlight, the nanowires are self-healing and in fact become more efficient at producing hydrogen over time. The nanowires can also absorb a very wide spectrum of sunlight. They harvest higher wavelengths of visible light to trigger the water-splitting reaction. The infrared heat they absorb, meanwhile, accelerates the reactions and keeps the hydrogen and oxygen separate, boosting efficiency.

In indoor laboratory experiments, the 4 cm x 4 cm device converted sunlight concentrated onto it via a lens into hydrogen with an efficiency of 9 percent. In a 140-minute outdoor test, however, the device had an average efficiency of over 6 percent.

“Our approach shows that this process can function efficiently under highly concentrated sunlight, thereby drastically reducing the cost associated with photocatalyst and semiconductor wafers,” Mi says. “Moreover, indium gallium nitride is one of the most produced semiconductors, thereby drastically reducing the production cost of solar hydrogen.”

In addition to further improving g the efficiency for a large-scale system, Mi says that “the next step of our research is to produce high purity hydrogen that can be directly used for fuel cells. We believe this approach can be implemented on a large scale following the scaled up production and market penetration of solar cells.”