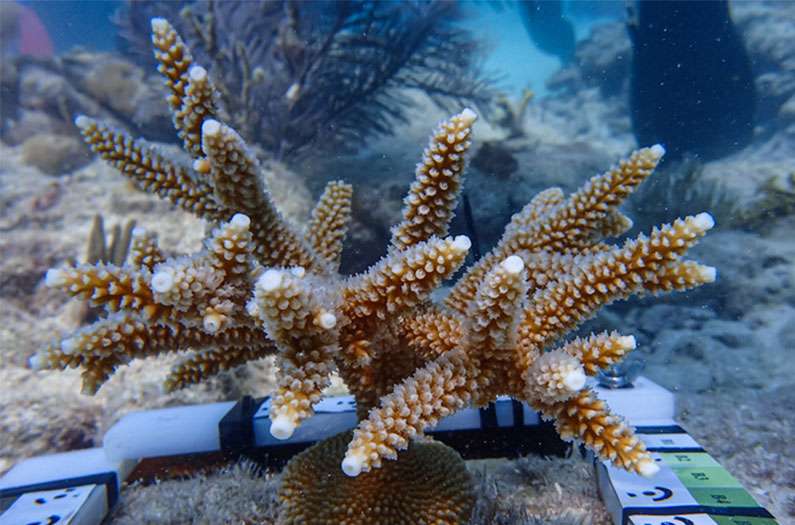 On the hunt for heat-tolerant genes, coral farmers discover there is no “super coral.”

In reef restoration, as in the stock market, scientists find that a diverse and flexible portfolio is the best way to hedge ones bets in a changing world.
By Warren Cornwall
January 4, 2023

As underwater heatwaves hammer the world’s coral reefs, there’s a rush to grow more coral to replenish ones left bleached and dying. Industrial-scale coral farming is under development in Australia and elsewhere to produce new crops of the tiny polyps that form the bone-like sculptures we often call “coral.”

These would-be coral farmers face an important question: How do you decide which strain of a particular species to grow?

Scientists are on the hunt for heat-loving coral species. Some are scanning the genomes of corals plucked from different parts of tropical lagoons looking for traits that help them endure higher temperatures. Others are cross-breeding variants of a species that weathered a heatwave. Still others are considering genetic engineering.

Now, scientists working in the Caribbean say have learned that having a broad variety of genetic strains could be more important than finding a single “super coral” of a species.

“This is very important information for reef restoration,” said Carly Kenkel, an ecologist at the University of Southern California who helped lead the research. “It means that the genetic diversity of coral transplants is going to be important for hedging our bets.”

Kenkel and colleagues made this discovery as they tried to solve a mystery. People had been planting chunks of the endangered Acropora cervicornis or staghorn coral, named for its spiky branches, which evoke a deer’s horns. Sometimes the new bits of coral thrived. Other times they died. But it wasn’t clear why certain crops met each fate.

So the scientists tried to cut through the confusion by controlling the variables. They took bits of coral cloned from 10 different staghorn corals. They placed samples of each variant at 9 different sites in the Florida Keys. For a year they tracked the growth (and sometimes death) of these fledgling corals, as well as environmental conditions such as water temperature.

At the end of the year they saw something that might seem counterintuitive: No single genetic strain proved superior in all places. In one spot, a certain version did the best—measured by how quickly it grew and how many of the samples survived. In another place, a different variant came out on top. There was no super coral, the scientists reported in late November in the Proceedings of the National Academy of Sciences.

The results highlight, once again, the importance of genetic diversity. You never know which individual in a population is going to have the distinctive traits that make it best suited to a particular environment. Just like playing the stock market, “diversifying your portfolio is safer than betting big on one particular company because even if some companies lose money, others will win,” said Kenkel.

This isn’t the first time someone has likened ecological diversity to savvy investing. In 2010 a group of salmon scientists published an often-cited paper in Nature showing that a diversity of different stream habitats was the key to the flourishing sockeye salmon runs in Bristol Bay Alaska. They called it the “portfolio effect.”

The new research did, however, point to one characteristic found in coral that thrived in a variety of locations. They labeled it “plasticity”—an ability for coral to modify themselves to adapt to a range of environments. For example, a coral might be able to grow bigger in conditions where size was rewarded, while staying smaller in other locations where it wasn’t. They gauged plasticity by comparing how much a particular trait—such as size—could vary within a specific genetic version of the coral, compared to the amount of variation seen among the corals as a whole.

Now, the researchers want to delve into this plasticity to uncover its genetic origins, and whether there are any downsides to being more plastic. It could even be related to the types of tiny algae called symbionts that live inside coral cells and nourish them through photosynthesis.

“Perhaps the most pertinent next steps include identifying the genetic basis of this plasticity and whether it belongs to the animal host or the algal symbiont,” said Wyatt Million, a postdoctoral researcher at Justus Liebig University Giessen in Germany, who worked on the coral as a PhD student in Kenkel’s lab.

So perhaps there are some corals that are more “super” than others. But it comes in the form of yoga-like flexibility.