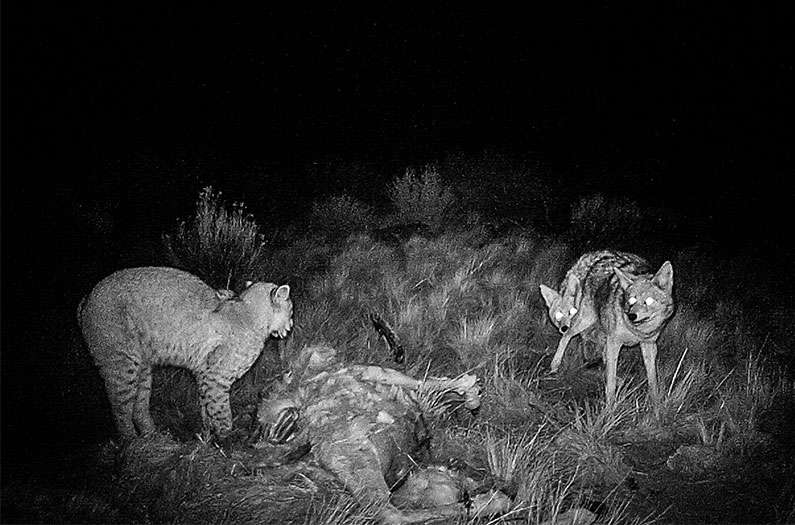 Scientists dub it the compression hypothesis, a phenomenon that could have implications for everything from animal reproduction to the spread of diseases.
By Warren Cornwall
January 18, 2023

When a cottontail rabbit crosses paths with a red fox, chances are something big will happen.

It turns out humans can make such encounters more likely. The implications for the individual animals could be a matter of life or death. But new insights about such meetings also point to the more subtle ways human transformation of landscapes might alter everything from the spread of animal diseases to the amount of stress prey animals experience in constant vigilance.

“This is a big question in ecology: How does human disturbance affect wildlife? We’re clearly seeing it can change their interactions,” said Ben Zuckerberg, a University of Wisconsin – Madison ecologist involved in the new research.

It’s pretty obvious that when humans plow, pave and logging places they alter the lives of the animals living there. What’s less clear is how it influences the interactions between the different animals. As natural habitat dwindles, do animals meet up less often because their habitat is chopped up or their numbers have declined (for example, as predators such as wolves are killed)? Or do they see each other more often because they are squeezed into smaller remnants land or because some animals flourish near people?

The question can be tricky to answer, given how many animals are roaming the landscape at any one time and how hard it is to keep track of their whereabouts. A group of Wisconsin scientists tapped into a combination of cheap surveillance technology and citizen science to tackle the mystery.

A state-sponsored program to track wildlife, Snapshot Wisconsin,  recruited volunteers to mount small weatherproof cameras on trees. These cameras than snap a photo when it detects movement in front of the lens from, say, a curious turkey. These cameras – more than 2,000 in all – created a trove of millions of photos that amounted to almost non-stop observation of wildlife in landscapes ranging from forests to farmlands to suburban back yards.

Scientists at the University of Wisconsin and the state’s Department of Natural Resources tapped into this photo collection with two fairly simple questions: How often did two different species of animal show up on the same camera? And when they did, how big was the time gap between their paparazzi moments?

The researchers scanned through nearly 800,000 photos looking for cases where species pairs, drawn from a list of 18 different species, crossed the same piece of ground. Then they calculated how much time separated them. The pairs ranged from Disney cute (deer and cottontail) to awkward (porcupine and raccoon) to potentially gruesome (deer and wolf).

On the whole, when animals lived near landscapes altered by people, they had closer encounters. On average, the time between when two individuals from a particular pair of species were recorded on a camera dropped from 6.1 days in natural habitat to 4.1 days in highly disturbed places, the scientists reported in December in the Proceedings of the National Academy of Sciences.

Neil Gilbert, who led the research as a UW- Madison PhD student, likened it to the potential for chance encounters at a packed party. “The more people you crowd into a party, the less elbow room you’re going to have and the more likely someone is going to step on your toes,” he said.

Was this a case of more people showing up for the party, or the party being moved to a smaller room? Analysis of the photo collection suggests a bit of both. Based on how frequently different species appeared in different locations, the researchers concluded approximately two-thirds of the increased chance of encounters could be explained by larger animal numbers. The remaining third could be explained by other factors, such as changes in how animals behave when they are near human-dominated landscapes.

While a four-day gap between when two species show up on a camera isn’t the same thing as meeting, it can point to a greater likelihood that two species will come nose to nose (or beak). And even having other species in the same general area can have an effect. For instance, scientists found that song sparrows produced 40% fewer young when exposed to recordings of predator calls, even when as their nests were shielded. More encounters, even if they aren’t between predator and prey, could also increase the possibility of a disease hopping from one species to another.

“The next questions are about the ramifications,” Zuckerberg said. “Does it lead to changes in disease transmission? Does it alter predation? Affect things like deer vehicle collisions?”