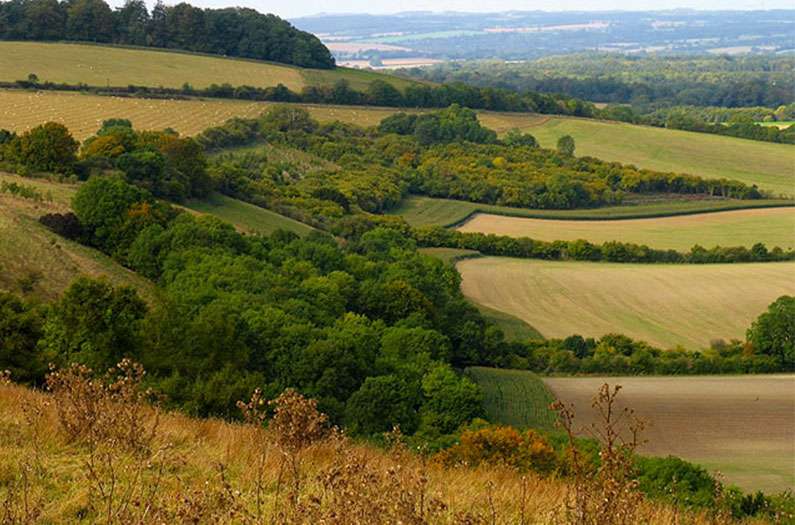 In a first-of-its-kind study, researchers compared the costs and benefits of land-sharing against land-sparing on UK farms. The results were striking.
By Emma Bryce
January 6, 2023

Planting hedgerows and bee-friendly flowers, leaving fallow lands, and using less fertilizer: these are routinely touted as the best way for farmers to fight climate change, and support biodiversity on their lands.

Now a new study shows that if instead of these piecemeal measures, UK farmers started restoring stretches of wild land on their farms, the country could achieve the same agricultural biodiversity and emissions targets—but while saving a considerable amount of cash.

UK farmers who take pieces of land out of production and use it to restore grassland, scrub, and woodland (a process known as ‘land-sparing’) could in fact reach those environmental targets using less than half the national taxpayer funding that currently subsidizes more piecemeal methods (known as ‘land-sharing’) that dominate on farms.

The findings suggest we may be frittering away money on the wrong conservation measures. Habitat restoration is notably underfunded in European agriculture, with just a tiny percentage of taxpayer-funded subsidies going to building up habitat, while the rest ends up funding land-sharing techniques. Yet until this study, no one had actually compared the costs and benefits of land-sharing against land-sparing—which is crucial, to make sure that citizens’ taxes are going to the right initiatives and having their expected impact.

The researchers on the new People and Nature paper started by nailing down a few indicators of improved biodiversity and climate specific to UK farms, such as increasing the local wild bird count, and reducing net emissions. Then they drew up a list of steps that would achieve these targets, such as providing winter bird cover and hedgerows under the land-sharing system; or creating new areas of woodland and grassland under the land-sparing system.

Recommended Reading:
To feed the world and protect nature, should we share agricultural land or spare wild habitat?

Finally, in a survey of over 100 people, they asked what farmers would expect to receive in subsidies, to implement these different measures on their land.

This yielded two main discoveries. First the researchers found that understandably, farmers expect more payouts to take on the riskier, long-term work of restoring wild land. But conversely, funding farmers to put these land-sparing approaches in place would actually save the UK money.

What’s more, this could be achieved with yield losses lower than 3%—less than the 4% that’s lost to conservation measures under the land-sharing approach. Plus, farmers who restore wild habitat would make these savings while continuing to meet climate and biodiversity targets.

But how can a more expensive conservation system result in lower overall costs? As the researchers explain it, habitat restoration delivers much larger environmental benefits per unit area, effectively giving taxpayers more bang for their buck. This makes land-sparing a more efficient way to achieve biodiversity and carbon reduction targets, they say.

This more biodiverse, carbon-sequestering land also means that fewer farmers would need to participate in the scheme to reach those environmental targets, so reducing the overhead running costs.

These new insights are important because they suggest current UK conservation measures aren’t working as well for people’s wallets or farmers’ yields. This matters also because for any yield lost through domestic conservation measures, the UK as a net-importing nation will bring in substitutes from other countries. And elsewhere, farming may occur at a greater cost to biodiversity and climate.

The researchers call for lots more work to explore the potential benefits of farmland restoration beyond the UK, in landscapes around the world. But for now, knowing that land-sparing gives taxpayers more environmental bang for their buck could help build momentum for this approach, as we search for ways to align agriculture with our planet’s climate and biodiversity needs.