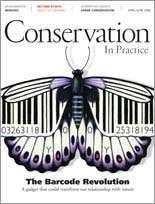 DEMOCRATIZING TAXONOMY Cover Story
Imagine a portable DNA barcode scanner that could transform people’s relationship with nature. Could such futuristic technology be to biodiversity what the printing press was to literacy?
by Marguerite Holloway

ENVIRONMENTAL HERESIES
Over the next ten years, the mainstream environmental movement will reverse its opinion and activism on population growth, urban-ization, genetically engineered organisms, and nuclear power.
An Interview with Stewart Brand

GET REAL
Behind the hue and cry over the Kyoto climate change treaty is one nagging but rarely reported reality: even if every nation in the world complied to the hilt, it would hardly approach solving the problem.
by Katherine Ellison


WHO’S FEELING THE HEAT?
“Do Americans really differ from people in other countries regarding their understanding of and concern about climate change? The answer is yes—and no.”

HOW DO YOU MEASURE WHAT YOU CAN’T SEE? Print Only
by Alan Burdick

YOUR LETTERS AND COMMENTS Print Only