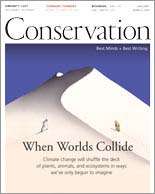 FORWARD THINKERS
A biologist in Hollywood, an insect tracker, a pair of ecological architects, and the new leader of the world’s largest conservation network. Here are a few people worth watching in 2007.
by Charles Alexander, Frances Cairncross, Eric Sorensen, and John Nielsen

WHEN WORLDS COLLIDE
Climate change will shuffle the deck of plants, animals, and ecosystems in ways we’ve only begun to imagine.
by Douglas Fox

ARE WE PUTTING TIGERS IN OUR TANKS?
The connection between biodiesel, land use, and habitat loss isn’t easy to pin down, but it isn’t easy to ignore, either.

STRANGERS IN OUR OWN LAND Print Only
by David Ehrenfeld

A MOST DANGEROUS GAME
Lions are eating African refugees while conservationists look the other way.
reviewed by David Baron