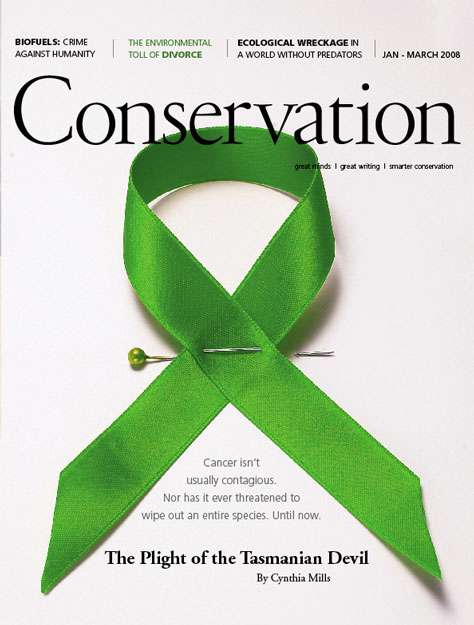 URBAN MYTHS
When most of us think about environmentally friendly places, we imagine a terrain untouched by concrete. Cities seem like ecological nightmares. But perhaps the conventional wisdom is exactly backward.
by Jonah Lehrer

ECOSYSTEMS UNRAVELING
Pull predators out of the mix, and a once lush green world turns into an ecological shop of horrors.
by William Stolzenburg

CANCER ON A WHOLE SPECIES Cover Story
The gruesome disease ravaging Tasmanian devils is unlike anything we’ve seen before.
by Cynthia Mills

TILL DEATH US DO PART
The environmental impacts of divorce

Six Degrees: Our Future on a Hotter Planet by Mark Lynas

YOUR LETTERS AND COMMENTS Print Only

An Agricultural Crime against Humanity
by George Monbiot