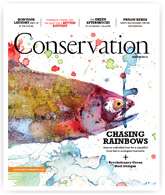 Chasing Rainbows
Lured by a utopian vision of nature, government agencies for decades carpet-bombed thousands of remote mountain lakes with billions of trout. Now, they’re determined to undo the damage they caused.
By Anders Halverson

Top This
The next generation of green roofs is downright cool—to look at and to live under.

Changing the Battery
As the world goes wireless and gears up for an all-electric roadway, the demand for lithium, crucial to all things mobile, could get dangerous—at least for the flamingos of Bolivia. But the future may hold a better, kinder battery—or maybe no battery at all.
By Michael Abrams

Green Aftershocks
How is the worldwide financial crisis changing conservation? There’s some good news—and there’s some bad news . . .
Dispatches from the Economic Meltdown

Minister of Cultures
John Nielsen talks with Gary Paul Nabhan about conserving the biodiversity of flavor.

3.9 Degrees of Separation
By Elin Kelsey