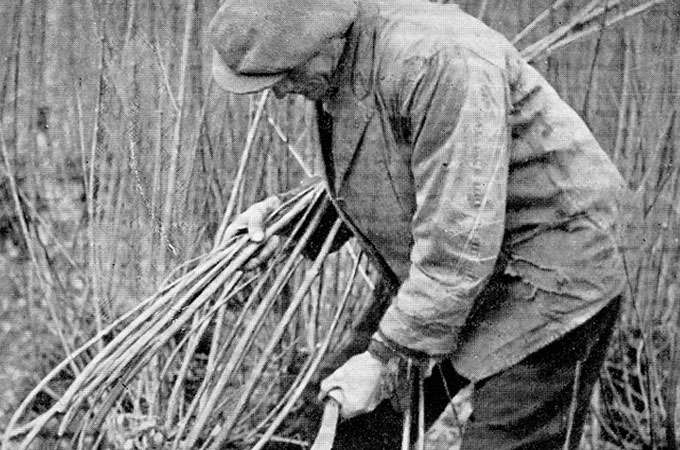 In 28 B.C. the Chinese were using soil bioengineering to repair dikes. In the 21st century, conservationists are using those same techniques as an ecological alternative to traditional engineering.

Ever since the industrial revolution, the modern answer to roadside erosion has been concrete and steel. But what if roots and stems could do the job just as well-and provide important ecological services at the same time?

One common technique is willow fencing, in which steep slopes are retained by creating shelves of willow trees. Another is brushlayering, where rows of live branch cuttings break up slope length and provide a stable base for more vegetation.

Some of the best historical literature about soil bioengineering is from Kevin Finney’s research (1). He found that much of the development and documentation of these techniques since the industrial revolution has occurred in the mountainous areas of Austria and southern Germany. Extensive forest management and road building led to increasing environmental problems such as erosion and stream bank degradation-much like what we see in the U.S. today. By the early 1900s, European soil bioengineers (mostly foresters and engineers by train ing) had begun to find new applications for old folk technologies to deal with their environmental problems. This article highlights the ecological significance and practical applications of basic soil bioengineering concepts.

Designs such as log terracing, live gully repair, and willow fencing mimic or accelerate natural recovery processes. Whether erosion occurs naturally or through human activity, a site begins to heal itself immediately upon failure. Consider for example a landslide in the mountains. Fallen trees will become embedded in the slope to create terraces in the eroding soils. The soil usually will contain partially buried wood, rocks, and other vegetation that stabilize the surrounding and up-slope areas, contributing to the terrace effect. Once these natural terraces reach an angle of repose, native vegetation begins to establish itself. Herbaceous plants, such as fireweed (Chamerion spp.) and pearly everlasting (Anaphalis DC.), begin to grow and protect the slope’s surface. These plants trap seeds from native shrubs and trees and help reestablish communities of soil microorganisms. Within a few years, this initial vegetation leads to more established vegetation and deeper soil stability.

The same is true of a well-designed soil bioengineering project. Unlike a non-living structure, a slope stabilized with living plants, such as willow or other shrubby species, is not only strong initially but grows even stronger with time as the vegetation becomes established. Even if plants die, roots and surface organic litter continue to play an important role during reestablishment of other plants.

Once plants are established, root systems reinforce the soil mantle much like steel rebar supports a concrete foundation. According to Gray and Sotir, (2) both herbaceous and woody vegetation can contribute to stability. In general, grasses and forbs prevent and control surface erosion, whereas woody vegetation prevents mass erosion or shallow slope failures. Deep-rooted woody plants with intermingled tap and secondary roots bind soil together and are key to long-term stability. These roots penetrate the soil mantle into fractured bedrock, thus anchoring the soil and increasing resistance to erosion. (3)

The ecological services provided by roots are not limited to those of structure and support. Roots also wick excess moisture from the soil, attenuate the depth of frost penetration, slow runoff, and filter sediment.

Chief among the practical advantages of soil bioengineering is that it saves money. Using native plants and seed limits your costs to only harvesting, handling, and transporting to a local site; and bulldozers aren’t always necessary. In fact, soil bioengineering is particularly useful on sensitive or steep slopes or in remote locations where the use of heavy machinery isn’t even feasible.

Less equipment means less impact. Limiting work crews to one entrance and exit route minimizes soil disturbance at the site and adjoining areas. And because projects can be installed during the dormant seasons of late fall, winter, and early spring, they often coincide with times at which other construction work is slow.

The key to successful bioengineering is starting early. Erosion often begins as a small and manageable problem but eventually expands to a size that requires costly traditional engineering solutions. A high initial investment in soil bioengineering often can pay off in the long run. Compared to traditional engineering systems, living systems have a much longer life expectancy. (2) Setup, regular maintenance, and inspection are crucial during the establishment period. But after two to five years, the project area should be vigorous and healthy. At this point, maintenance requirements should be minimal-typically just light pruning and removal of undesirable vegetation. Even on difficult sites, maintenance costs comprise about ten percent of overall project funding. (5)

Bioengineered systems become part of the landscape. At its best, bioengineering encompasses not only the natural history and evolution of the surrounding area but also the cultural and social uses of the area. Blending an erosion control system into the landscape is particularly relevant in parks and other visually sensitive areas. For example in Lake Chelan, Washington, the designers of an erosion control project along a highway that abutted private land were able to address private landowners’ concerns about aesthetics and blend the soil bioengineering project into the existing landscape.

Matching the Solution to the Situation

Bioengineering is inherently site-specific. There are many soil bioengineering techniques, and each has attributes to solve different problems.

Living vegetation is the most critical component of a soil bioengineered system. When selecting the best plants for a site, factors to bear in mind include:

3. intended role of vegetation in the project, such as rooting characteristics

4. growth characteristics and ecological relationships of the plants

Whereas a single plant species may serve the primary structural requirement of a soil bioengineering project, a mixture of species provides a combination of deep and shallow rooting and high and low elevation vegetation. For example, to deal with surface erosion and to stabilize an eroding fill-slope along state highway 101 in Lost Creek, Washington, the Department of Transportation planted 16 different native tree and shrub species, totaling approximately 1000 plants (4).

Like any tool, soil bioengineering is not the sole solution to erosion problems. In some surface erosion areas, for example, less intensive techniques may be adequate, such as seeding grass and forb mixes, hydromulch-ing, or spreading a protective layer of weed-free straw. In cases of severe erosion, it may be best to use a traditionally engineered system alone or in combination with soil bioengineering.

A database about plants in the U.S., includes identification information, distribution, growth and crop data, plant symbols, links, and references.

Pdf documents on plant sources and selection for bioengineering.

Resources and business opportunities for professionals.

Robin B. Sotir and Associates Inc.