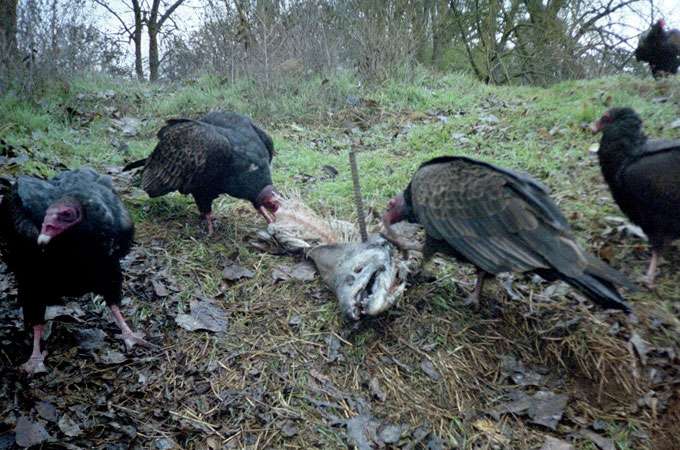 A Good Fish for the Wine

Salmon may be the perfect fertilizer for Pacific Coast vineyards, according to new research showing that wine grapes along a California river get up to one-fourth of their nitrogen from the sea. Unlike commercial fertilizer, which is expensive and costly to transport, “salmon fertilizer” is free and is transported directly to riparian vineyards by scavengers.

“While there is great interest in salmon restoration in California, no connection has been made to the likely historic importance of salmon for delivering marine nutrients to inland California,” say Joseph Merz of the East Bay Municipal Utilities District in Lodi, California, and Peter Moyle of the University of California at Davis.

Perhaps a million chinook (Oncorhynchus tschawytscha) once spawned in California’s Central Valley rivers each year, bringing literally tons of nutrients back from the sea. Today these chinook runs have dropped to about one-fifth their historical size, after dams blocked salmon migration routes and river regulation made streams too small and warm for salmon eggs and fry.

To see whether even today’s runs can help fertilize vineyards, the researchers measured the marine-derived nitrogen in wine grape leaves along two rivers: the Mokelumne, which has consistent chinook runs, and the Calaveras, which does not. Marine-derived nitrogen can be identified because sea water contains more of the relatively heavy isotope 15N, whereas fresh
water contains more of the lighter isotope 14N.

The researchers found that vineyards near the salmon-rich Mokelumne River had more marine-derived nitrogen than those near the salmon-poor Calaveras River. Along the Mokelumne, 18 to 25 percent of the grape leaves’ total nitrogen came from the sea, and two lines of evidence point to salmon as the source. First, the researchers saw many animals feeding on salmon carcasses in the Mokelumne, and studies elsewhere have shown that scavengers move most salmon carcasses from spawning grounds onto land. Second, the researchers found salmon jawbones scattered in riparian vineyards along the Mokelumne.

“Salmon can subsidize ecosystems even in highly altered rivers that flow through agricultural areas,” say the researchers. Although this work focused on vineyards in riparian areas, salmon could also fertilize vineyards in other areas via irrigation water pumped from spawning rivers.