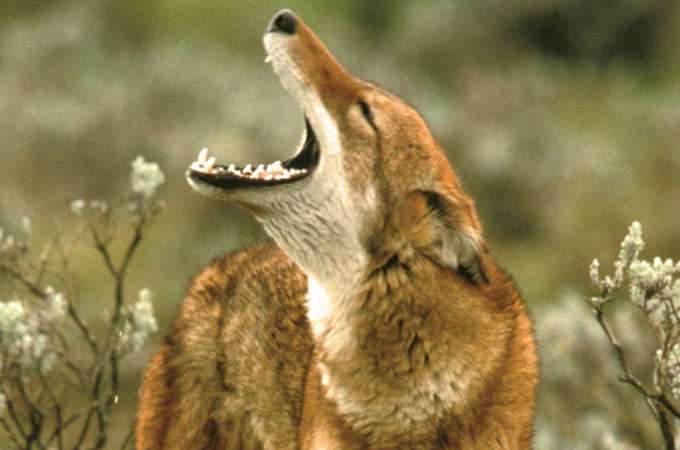 With only about 500 remaining, Ethiopian wolves (Canis simensis) are the world’s rarest canid, and their most immediate threat is rabies from domestic dogs. But new research shows that we don’t have to immunize each wolf against rabies: vaccinating just one-third of a population was enough to protect it during a rabies epidemic.

With only about 500 remaining, Ethiopian wolves (Canis simensis) are the world’s rarest canid, and their most immediate threat is rabies from domestic dogs. But new research shows that we don’t have to immunize each wolf against rabies: vaccinating just one-third of a population was enough to protect it during a rabies epidemic.

“Our work suggests that targeted reactive vaccination, rather than blanket vaccination, can control infectious diseases like rabies in threatened wild canid populations,” says Claudio Sillero-Zubiri of the University of Oxford in the U.K., founder and director of the Ethiopian Wolf Conservation Programme, who with 13 coauthors presents this work in Nature.

Ethiopian wolves are restricted to the country’s high-elevation grasslands, with the largest population of about 300 individuals living in the Bale Mountains. These wolves are divided among three areas (including Web Valley and Morebawa) connected by narrow corridors. A rabies epidemic killed three-quarters of the Bale wolves in 1990, and conservationists began vaccinating local dogs in 1995. Even so, in 2003 another rabies outbreak killed 72 of the 95 wolves in Web Valley.

This outbreak led to emergency wolf vaccinations. The researchers’ goal was to keep the Web Valley wolves from spreading rabies to the Morebawa wolves via the interconnecting corridor. “We looked at vaccination studies that don’t prevent all outbreaks but do reduce the chances of really big outbreaks—ones that could push an endangered population over the extinction threshold,” says Dan Haydon of the University of Glasgow, U.K.

They decided to try stopping the worst epidemics with low-level vaccination, first targeting the Morebawa packs closest to the corridor and then treating those progressively further away. About one-third of the 105 Morebawa wolves were immunized. “This strategy turned out to be effective and practical,” says Haydon. Only an estimated seven Morebawa wolves died, and all of these were in the pack closest to the corridor.

According to a model of rabies outbreaks in the Bale wolves, epidemics that start in Web Valley have a 25 percent chance of spreading to Morebawa. However, this likelihood drops to less than one percent with the researchers’ vaccination strategy.

This new approach to controlling infectious diseases in endangered species is already being incorporated into the latest recovery plan for California’s island fox (Urocyon littoralis), which—like the Ethiopian wolf—is threatened by diseases from domestic dogs, says Rosie Woodroffe of the University of California, Davis. Woodroffe, who focuses on resolving conflicts between people and carnivores, anticipates that low-level vaccination will also have broader benefits for wildlife. “I think this approach will be widely relevant to managing many species endangered by disease—not just canids but also species like gorillas threatened by Ebola,” she says.