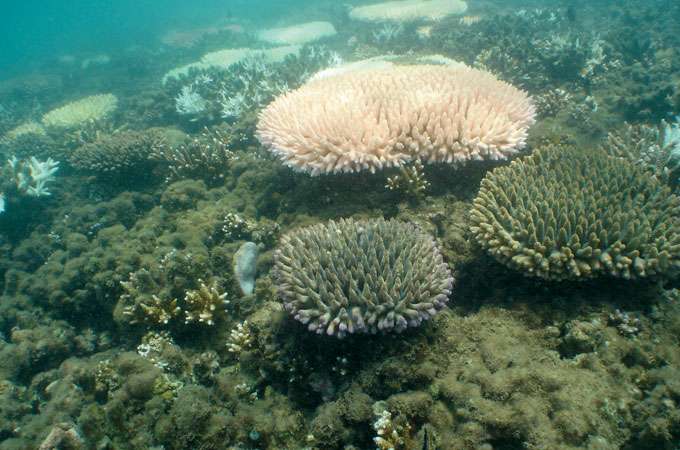 A Nugget of Hope for Coral Reefs

Good news at last for coral reefs: although warmer waters can bleach and kill vast swathes of coral, some colonies continue to thrive despite temperature spikes.

This is “a nugget of hope for coral reefs in an era of climate change,” say Ray Berkelmans and Madeleine van Oppen of the Australian Institute of Marine Science in Proceedings of the Royal Society: Biology.

Corals get their food and coloration from symbiotic algae, but temperature-stressed corals expel their algae and so become completely white or “bleached.” Although many coral species appear to have only one type of algae, recent studies have shown that most Great Barrier Reef colonies have two types: one that is dominant and another that is present at lower levels. Some corals can shift which type of algae is dominant, raising the question of whether this could help reefs withstand climate change.

To see whether Great Barrier Reef corals shift their dominant algae during temperature spikes, the researchers did two experiments on the common Indo-Pacific stony coral Acropora millepora. They first transplanted coral colonies from cooler waters to warmer waters (about 27 and 29 degrees Celsius, respectively, during the summer). All colonies in the warmer site had only type D or “warm-water” algae. Most of the colonies from the cooler site were initially dominated by type C2 or “cool-water” algae; however, some were dominated instead by “warm-water” algae.

The researchers found that corals transplanted from the cooler site did shift algae to survive in the warmer site. All 22 transplants from the cooler waters bleached to pale white during their first summer in the warmer waters, and roughly one-third died. By the next winter, however, the surviving transplants were a healthy brown again. All of them, even those initially dominated by the “cool-water” type, had only “warm-water” algae.

The researchers caution that not all corals can shift algae and that adapting to waters that are a degree or so warmer may not be enough for reefs to survive the temperature increases predicted for the next century. However, algae-shifting “may be enough to ‘buy time’ while greenhouse gas reduction measures are put in place,” say the researchers.