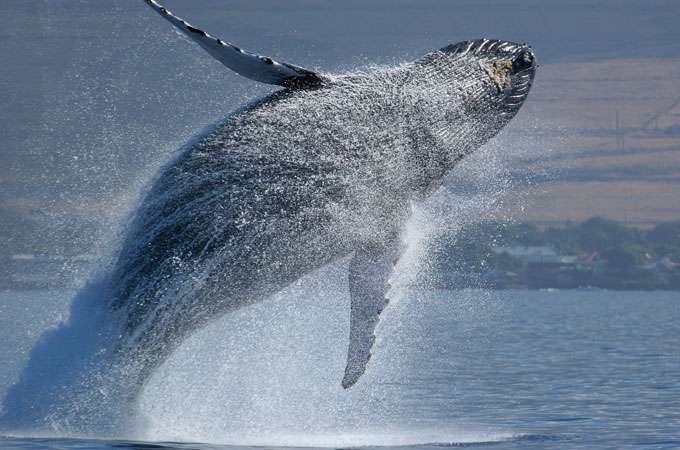 Age Is Only Skin Deep

Researcher Daniel Burns and his colleagues were keeping a respectful distance behind a pair of courting humpback whales when a third whale came onto the scene. Soon Burns and his six-meter boat were sandwiched between three 35-ton whales. But with a kitchen sieve strapped to the end of a stick, he got what he came for: a sample of whale “dandruff” shed by the animals when they launch themselves out of the water or slap the surface.

Burns and his colleagues think the flakes could offer a noninvasive way of working out a whale’s age. If they are right, one of the key arguments in favor of killing whales for scientific purposes will be dead in the water.

Currently, the most accurate way to age baleen whales is to count the layers of earwax thought to form twice a year in the enclosed ear canals of humpbacks. But counting them requires killing and dissecting the whale.

Burns, a PhD student at the Southern Cross University Whale Research Centre in Lismore, New South Wales, is part of a research team led by Peter Harrison. Their team—and other groups around the world—hope that clues to a whale’s age lie in the tips of its chromosomes, where there are stretches of short, repeated DNA sequences called telomeres. Like countdown timers, telomeres gradually shorten with age in some species, including humans.

If whales are also shown to lose telomere sequences with age, telomere analysis could provide a nonlethal means of assigning individuals to broad age groups. The need is urgent, say researchers, because last year Japan declared that it will double its catch of minke whales for scientific research. Japan will also include—for the first time since the International Whaling Commission (IWC) imposed a moratorium on commercial whaling in 1986—humpback and fin whales in its annual catch for research, with a yearly take of 50 of each species. Humpback whales are listed as vulnerable on the International Union for the Conservation of Nature and Natural Resources Red List. The fin whale is on the list as endangered.

One of Japan’s main scientific arguments for increasing its catch is the need to collect samples to determine population structure. Harrison’s team and others hope that the telomere method could scotch this claim.

Preliminary data from a handful of humpback whales hint that calves and adults can be distinguished by their telomeres, says Harrison. “Ideally, in the long term, we’d like to refine it to a 5 to 10-year band width,” he says. This range would be sufficient for population modeling, he says.

Per Palsbøll, a population geneticist at the University of California, Berkeley, has examined the DNA in skin biopsies taken from a dozen whales ranging from calves to 20-year-old animals. “From this tiny data set, we see longer telomeres in younger animals,” says Palsbøll. But he cautions that the method is far from reliable at this stage. “We have tremendous problems with reproducibility, even within samples from the same individuals,” he says.

Also, skin is often damaged and dying tissue is low in quality DNA. Skin flakes from different whales can get mixed up in the water, but Harrison thinks this problem will be overcome by checking the DNA fingerprints, or genotypes, against a library of whale biopsies collected over several decades.