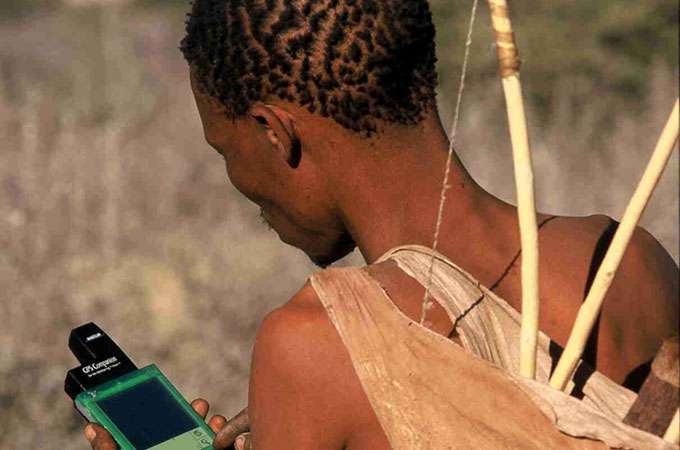 In 2003, trained trackers combing the rich jungles in the Republic of Congo’s Lossi Sanctuary for gorillas and chimpanzees stumbled upon a disturbing trend. Duikers, dog-sized antelopes that weave and dive through the jungle’s dense undergrowth, were dying at an astounding rate—local indices dropped 50 percent compared to a 2000 census. Gorillas and chimpanzees were dying at similar rates. Blood tests confirmed the culprit was the deadly virus Ebola. The surprise was that no one had previously known that Ebola killed antelopes.

Yet there was no doubt the terrible data were real. The findings were based on hundreds of observations precisely mapped with CyberTracker software. CyberTracker allows hand-held computers to use stylized images instead of text for data entry. Its heart is a menu of icons that depict whatever elements researchers choose. Trackers need only select a pre-programmed image that matches what they see—a grazing antelope, a carabid beetle—and with one tap, the observation is recorded and paired with geographic coordinates via a Global Positioning System (GPS) link. Trackers hardly have to break stride as they work, which allows enormous numbers of data points to be amassed with little effort. The information can be downloaded to a computer and immediately mapped, thus enabling scientists to make real-time observations about trends, such as the ones from Lossi Sanctuary that showed duiker declines.

The program’s greatest strength, and the feature that sets it apart from its competitors, is its ability to transcend language and culture because of its reliance on images, not words, for data entry.

CyberTracker creator Louis Liebenberg, a South African scientist and author, first came up with the idea in 1996 while tracking with a group of Kalahari Bushmen. Liebenberg realized that he could help save the Bushmen’s rapidly disappearing knowledge if he could find a way to help trackers, who could neither read nor write, record their observations. Thus CyberTracker was born.

CyberTracker’s biggest impact has been in South Africa’s national park system. Kruger National Park official Judith Kruger says that rangers use 110 hand-held computers daily to record sightings on patrol—everything from broken fences to elephant-damaged trees to invertebrates. Liebenberg and two rangers from South Africa’s Karoo National Park used it to document seasonal shifts in black rhino feeding behavior. And CyberTracker is being used to record garbage found littering beaches in Gabon as a way to persuade source nations to help clean up. The program allows for remarkable precision: one 500-m-long section of shoreline in Loango National Park was covered with 535 plastic water bottles and 560 flip-flops among more than 3,000 bits of trash.

The software is free and has been downloaded by more than 6,000 people since it was first made available on the Internet in 2000. About 500 users from 30 countries have registered the software—from the entire Spanish National Park Service to a multinational research group in the Arctic to individual trackers in the U.S. With the help of a 2-million-Euro (approximately US$2 million) grant from the European Commission and Conservation International, Liebenberg is developing the next generation of Cyber-Tracker. Three versions will offer increasingly complex programming features along with conservation-specific analysis tools to allow the calculation of standard measures such as Patrol Effort or Index of Abundance.

Liebenberg says the biggest benefit has been to give an authoritative, scientific “voice” to skilled trackers in Africa who can’t otherwise share their knowledge because they can’t write. Karel Benadie is a ranger and expert rhino tracker who worked with Lieben-berg in Karoo National Park. He told Liebenberg that his inability to write down his rhino observations meant “the PhDs would never listen to him before,” Liebenberg said. With Cyber-Tracker, “Now they do.”

More on the Tracker: www.cybertracker.co.za

About the Author
Nancy Bazilchuk is a freelance writer based in Trondheim, Norway.