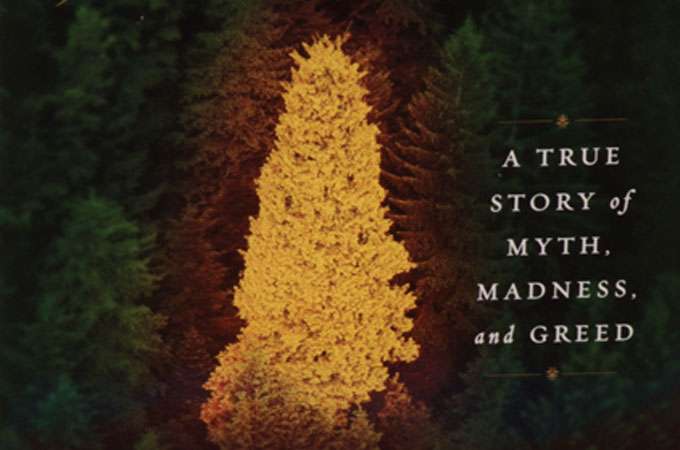 The Golden Spruce: A True Story of Myth, Madness, and Greed
By John Vaillant
Norton, 2005
Reviewed by Jeffrey A. Lockwood

A simple story: Grant Hadwin was an environmental wacko who had a mystical experience and then cut down a sacred tree to protest the logging of old-growth forests. A self-evident subtitle: A True Story of Myth, Madness, and Greed refers to a symbolic tree, a crazed man, and a greedy company. So it would seem.

But The Golden Spruce is anything but simple and self-evident. The spruce had profound meaning to the Haida, a tribe of native Americans who shared a remote Canadian island with the tree. The spruce had a radically different meaning to Hadwin, who saw the tree as a freak show of the logging industry. This environmental tragedy would typically be presented in the facile terms of good-versus-evil to provide readers with immediate moral gratification. However, John Vaillant has given us a rich story filled with authentic ambiguities: a myth without a hero.

If “myth” is a pejorative term for untruths, then this book is laced with myths—which Vaillant debunks. The Haida people, whose ancestors likely inhabited the Queen Charlotte islands during the Pleistocene, have a legacy of ruthless warfare and slavery. The Haida were not tranquil stewards of Eden any more than the European explorers were rapacious fiends of hell. Rather, both were sophisticated, violent, proud, and bigoted people whose myopia sowed the seeds of their own demise.

When the Europeans arrived seeking wealth, the two cultures conspired in “a rapacious festival of unrestrained capitalism” that drove the sea otter to the brink of extinction. And as the Europeans turned from pelts to timber, the Haida greedily joined the fray. When spruce from the Queen Charlottes was found to be ideal for building airplanes during World War I, enough wood was harvested in two years to girdle the earth one-and-a-half times. Throughout the twentieth century, the native people were suspicious of claims that the trees could regenerate fast enough to keep up with the logging, but as a Haida logger admitted, “When you have that job, you forget about everything else for a while.”

Loggers are torn between a reverence for trees and the allure of lumber, and perhaps nobody was more torn than Hadwin. A prep-school refugee, he rejected a life of privilege and embraced logging. With a brilliant mind and a rock-hard body, he could lay out timber cuts and roads with incredible efficiency. More at home among ancient trees than among his contemporaries, Hadwin flourished—for a while. Over time, he sensed ever more deeply the schizophrenic nature of signing death warrants for the forests he loved.

Hadwin’s summary execution of the golden spruce catalyzed the surrounding community. Whereas greed drew together diverse cultures in the 1800s, what united contemporary loggers, Indians, and environmentalists was rage at the perpetrator of botanical butchery. Hadwin was mad, too—incensed and insane. Amid the forests he helped decimate, Hadwin suffered what psychiatrists call a “mystical experience with psychotic features.” But Vaillant asks the hard questions: Was Hadwin’s world view any less sane than the “common tendency to passively accept the abuse of the very systems that keep us alive”? Who is nuts—the reader with the SUV or the mystic with the chainsaw? Is it rational to vilify a man for cutting down a single tree in protest when there is no punishment for those who cut down entire forests for profit? To paraphrase the madman Joseph Stalin: the death of one tree is a tragedy; the death of ten million trees is a statistic.

The Golden Spruce is a wonderfully complex tale, but the book closes with Vaillant falling for the siren song of symbolic simplicity. He draws the obvious parallel between the tree and the Haida: both are being resurrected. The tree persists via scions taken from the felled spruce and grafted onto normal trees. And the Haida endure through off-island assistance and advocacy. However, the missing and more compelling similarity lies between the golden spruce and its killer.

Yellow trees are not terribly rare. The golden spruce was unique because such biologically flawed, chlorotic anomalies do not normally thrive. This tree flourished because the Yakoun River provided an exceptionally rich source of nutrients and an unusual source of light. Reflected from the glassy surface of the water, sunlight bounced upward into the tree. And tucked beneath the golden foliage were green needles that could use the oddly impinging light for photosynthesis. Likewise, Grant Hadwin was a freak, a mentally flawed social anomaly who, for a while, thrived.

Although Vaillant stops short of this interpretation, it seems to me that Hadwin euthanized the golden spruce. He merely finished what we had begun and then escaped authorities by disappearing into the misty waters of Hecate Strait. Perhaps the spruce will survive and maybe Hadwin made it to the coast. But I don’t think so.

With the decimation of the Haida, the tree’s message has become muddled. The elders say that the spruce warns us of hubris, but the spoken parables lose meaning when transferred to written text. And with the loss of Grant Hadwin, we have silenced another message: We can not survive by preserving an icon while destroying the cathedral. Hadwin saw that the once-glorious tree was a pathetic “pet” used by a consumer society to assuage its conscience and mask the hypocrisy of conservation. Hadwin and the Haida both had something to tell us. And we failed to listen. Perhaps one day we will heed the warning issued by Sophocles 2,447 years ago—don’t kill the messenger.