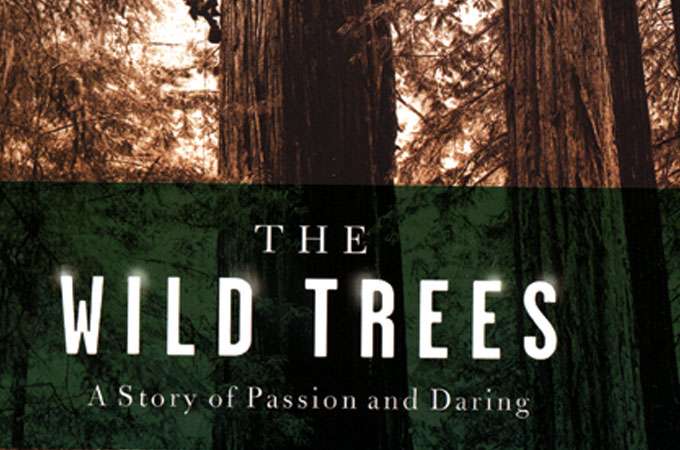 The Wild Trees: A Story of Passion and Daring
By Richard Preston
Random House, 2007
Reviewed by David Rains Wallace

All organisms must explore their environments. Exploration acquired a problematic dimension with the rise of civilization, however. It became a progressive sequence of discovery leading to exploitation and colonization, which raised the troubling possibility that we might someday have nothing left to discover. Yet civilization’s “been there, done that” attitude is an illusion. No matter how much history accumulates, every generation still has to explore the earth.

The Wild Trees is one of the best exploration stories I’ve read. Its account of maverick naturalists who discovered the world of the giant redwood, the Douglas fir, and the mountain ash (an Australian eucalyptus) forest canopy is an unusually successful blend of the main currents of classic exploration writing—the sublime and the sensational. Like Darwin’s Voyage of the Beagle, Richard Preston’s book inspires with scientific discovery. Like Stanley’s In Darkest Africa, it excites with gruesome perils and derring-do (along with mild sex, traditionally rare in the genre).

Yet in two important ways, the exploration Preston describes is very different from Darwin’s or Stanley’s. Because it is inside civilization’s traditional frontiers—in touristed parks or, in the case of the mountain ash canopy, in Melbourne’s water district—the hidden, ancient world was not noticed by the exploration establishment: the National Geographic Society, National Science Foundation, and others. And the big-tree canopy, although beautiful and scientifically significant, may offer little that civilization traditionally has wanted from exploration. It may be exploitable if its ecosystems—microorganisms, lichens, fungi, ferns, shrubs, small trees, and largely unknown animals—not to mention the treetops themselves, yield useful information. But the canopy frontier is less colonizable than the South Pole. Indeed, it is so dangerous and fragile that the climbers try not to “open it up” but to keep it closed, hiding trees’ locations .

In response to these differences, the actors in Preston’s saga are more ambivalent than earlier explorers. Exhilarated by being the first to enter the throne rooms of the forest gods (they name trees “Zeus,” “Rhea,” “Helios”), they are also dejected at the possibility that these might be the last giant trees to discover. “In the history of botany in the twentieth century, there was never a day like the Day of Discovery, and there will never be a day like it again,” scientist Robert Van Pelt tells Preston, referring to the finding of a “new” tall redwood grove in 1998, “because there is nothing on earth like those trees left to be found.” Their ambivalence is understandable, given that the timber industry has cut over 95 percent of the original redwoods.

Conservation has been historical discovery’s stepchild, an afterthought to exploitation and colonization. If progressive exploration comes to a shocking dead end, then conservation’s prospects could be problematic, indeed.

But if the tree explorers confront history’s exploration dilemma, they also imply alternatives. Their expressed aims differ from Stanley’s or Darwin’s. They seem to explore more in the spirit of prehistoric vision quests and walkabouts. Although their discoveries have recently wrung some recognition from the exploration establishment, they still don’t sound much like National Geographic.

“When I first saw the redwoods in the Grove of Titans, I remember feeling a deep physical attraction to them,” botanist Marie Antoine tells Preston. “One of the great things about climbing is that it’s meditative . . . I have a fairly cynical outlook on so many things in the world today—this insane world. But as long as we have these trees to ask questions about, there’s hope for us.” “Questioning” trees seems an open-ended, steady-state pursuit, which is how prehistoric cultures apparently regarded exploration.

A case in point is the question of the tallest tree, which drove a mostly nonclimbing explorer, Michael Taylor, to find the hitherto unknown groves that Antoine and her associates then scaled. In the historical tradition, there has to exist a tallest tree to discover and record officially. When I was writing part of the Redwood National Park Handbook in the mid-1990s, I duly noted that the park contained the record tree, identified by the National Geographic Society in the 1960s. So I was embarrassed, reading The Wild Trees, to learn that Taylor had found trees as tall or taller in various California state parks in the mid-1990s.

Preston’s epilogue, however, tells how Taylor and fellow explorer Chris Atkins found an even taller tree in Redwood National Park in 2003. But is it really the tallest redwood? Maybe it is, for now. Even so, its top may die or another tree may grow taller in a few