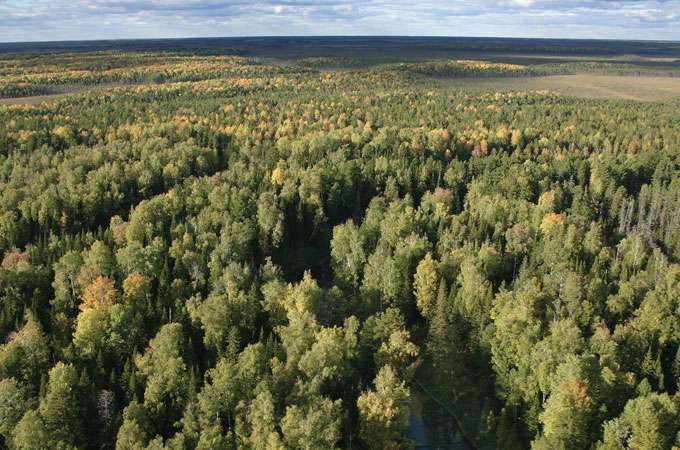 For years, researchers have regarded the boreal forest as one of the world’s largest carbon reservoirs. The boreal already houses about as much carbon as the earth’s atmosphere, and that amount was thought to be increasing, making the forest a modest counterweight against climate change. But a new study in Nature suggests global warming could be turning this reservoir into a tinderbox, transforming the boreal from a carbon sink to a carbon source along the way.

Led by Ben Bond-Lamberty and Stith Gower, both of the University of Wisconsin, the study worked to identify the single biggest determining factor behind a forest’s carbon balance—whether it absorbs more carbon than it emits. Earlier research had convinced many that atmospheric carbon dioxide was the driver of this process; it was thought that increasing amounts of the gas caused forests to produce more leaves and other organic material, helping soak up the carbon emitted by human activity. This hypothesis was sparked by satellite images suggesting the boreal’s biomass had grown. Bond-Lamberty and company took a closer look and found that there could be a different, potentially ominous interpretation of those images.

The boreal forest is a vast northern belt of trees just below the tundra, home to such plant groups as conifers, broadleaf trees, and mosses. Modifying a pre-existing computer model to reflect the competition between these groups, the researchers entered data on forest fires, climate, and other aspects of the boreal ecosystem between 1948 and 2005. The number of forest fires had increased during that time, and the researchers realized that, as burned swaths of forest recovered, the earlier satellite images might have mistakenly recorded this regrowth as the continuing growth of a mature forest. Their final conclusion? Fire activity, not carbon dioxide, was the greatest predictor of the forest’s carbon balance, “pushing the system toward being more of a carbon source,” Bond-Lamberty said.

The research shows that much of the boreal has already transitioned from sink to source, a transition that could start happening on an ever-larger scale. Many scientists expect the number of forest fires to continue rising as the earth warms. These fires turn the carbon in trees from a solid into a gas which re-enters the air via flames and smoke. Making matters worse, the new absence of trees causes the forest’s soil to release carbon more quickly.

Yet, while this potentially accelerates global warming, the overall climate impact remains unclear. Research by James T. Randerson of the University of California, Irvine, suggests that boreal fires might actually counteract global warming. According to his model, new growth, along with the snow buildup in burned patches, is more reflective than darker, mature trees and therefore deflects the sun’s rays.

Bond-Lamberrty acknowledges that, while his new study moves the discussion forward, the debate over the consequences of forest fires is far from settled. “The potential for feedback is one of the biggest questions in the field,” he said.