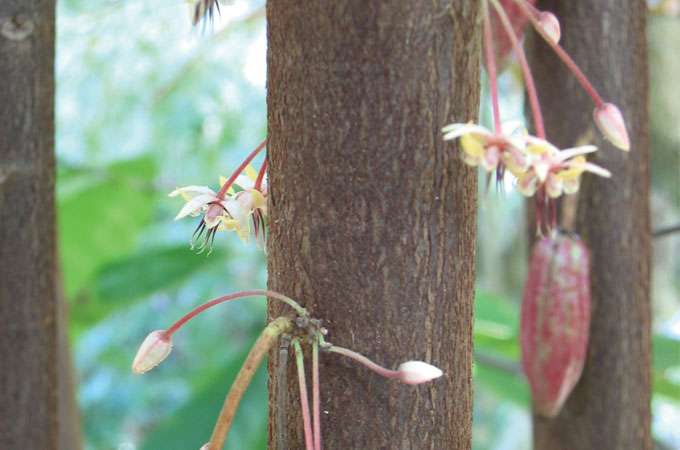 Brazilian Cocoa Farms Not Sustainable After All

Although conventional wisdom holds that growing cocoa (Theobroma cacao) under a canopy of native trees is sustainable, this may not be true in Brazil’s Atlantic Forest. New research shows that the canopy over cocoa farms there is losing its diversity: the original trees are dying off and are being replaced by fast-growing species, including invasive nonnatives.

“The forest existing 50 or 100 years ago, when most cocoa plantations were first established, is aging very rapidly,” say Samir Rolim and Adriano Chiarello of the Reserva Natural de Vale do Rio Doce in Linhares, Brazil, in the December 2004 issue of Biodiversity and Conservation. “The long-term survival of these forests is questionable, and their role in maintaining biodiversity in the long run is limited.”

The forest along the Atlantic coast of Brazil is remarkably biodiverse, with an estimated five percent of the animals and seven percent of the plants in the world. More than 90 percent of this forest is already gone, and the rest is threatened by development. Many workers in the region depend on cocoa production, and most of the cocoa there is grown in forests where the understory has been cleared and the canopy has been thinned to provide the optimum shade level. Called the cabruca system, this method of producing cocoa has been widely hailed as sustainable agroforestry.

To see how sustainable the cabruca system really is, Rolim and Chiarello assessed the canopies at 20 cocoa farms in the Rio Doce Valley, where the crop has been grown since the late 1800s. The researchers divided the trees into categories ranging from pioneer species (fast-growing and short-lived) to climax species (slow-growing and long-lived) and estimated the sizes and densities of trees by both species and category. Saplings were defined as being less than 5 cm in diameter at breast height.

The results suggest that the cabruca canopies in eastern Brazil are not regenerating sustainably. Notably, the canopies are dominated by fast-growing species, which comprise more than half of the saplings and three-quarters or more of the larger trees.

One reason there are so many pioneer species is that the undergrowth is cleared twice a year and only the fastest-growing trees can grow large enough in six months to escape being cut. Another reason is that farmers plant fast-growing trees, including invasive nonnatives such as mimosas (Leucaena leucocephala), to shade the cocoa.

On the plus side, Rolim and Chiarello stress that the cabruca system is better than deforestation and that it could easily be made more sustainable. “Management practices must be improved to justify the role of conservation normally attributed to the agro-forestry systems,” they say. For starters, cocoa farmers could clear just the nonnative saplings, letting the native saplings grow and rejuvenate the aging canopy.