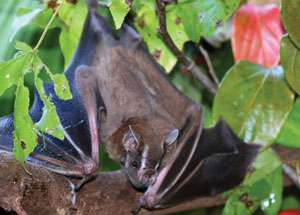 Brazilian researchers have found an unusual way to reforest hundreds of thousands of hectares of denuded Atlantic and Amazonian forests. They are luring fruit bats into fruit-free cleared areas by impregnating fake fruits with essential oils of the bat’s favored foods. When the bats fly to investigate the aromatic foam-rubber fruits, they defecate a rain of seeds from the fruits they’ve already eaten, like flying Johnny Appleseeds.

“Frugivorous bats are natural and efficient seed dispersers, and they provide this service for no cost at all,” says zoologist Sandra Bos Mikich, from the Ecology Laboratory of the Brazilian Agricultural Research Corporation (Embrapa Florestas). “Bats also collect the seeds from nearby forest fragments, so that the chosen plants are native and already adapted to local conditions.”

Mikich and bat biologist Gledson Bianconi of the Universidade Estadual Paulista knew from their earlier research that just the aroma of ripe Piper fruits was enough to attract some species of fruit bat to fake fruits. But using bats as flying seed dispersal mechanisms would work only if the bats could be fooled into crossing open areas far from their last meals on the tropical forest fringe.

So the research team staked out plots in corn and soybean fields, up to 700 meters from the edge of a small tropical forest remnant in southern Brazil’s Atlantic forest. They slathered some green foam fruits with essential oils extracted from fig and Piper plants and treated other foam fruits with water instead of essential oils as controls. These fake fruits were then suspended in mist nets, and the researchers watched what happened.

Much to their amazement, not only did bats preferentially come to the fake fruits treated with essential oils, but almost half of the bats defecated seeds, which showed that the animals were coming to the fake fruits even though they had recently eaten. Even more surprising was the finding that great fruit-eating bats (Artibeus lituratus), which prefer figs, were attracted to the fake fruits treated with Piper plant oils. The researchers think that’s because in the wasteland of a corn or a soybean field, where no other fruits were available, the bats were willing to be attracted to whatever fruits were around—even fake ones.

Mikich and her colleagues are now working to figure out which components of the essential oils actually attract the bats, so that those components can be synthesized. The synthetic oil will be easier and cheaper to use for widespread restoration projects, she said, and hopefully could be of help in other parts of
the globe where there are frugivorous bats. Mikich’s team has already successfully tested the attractive ability
of oils from plants collected in southern Brazil on bat species from northern Brazil.