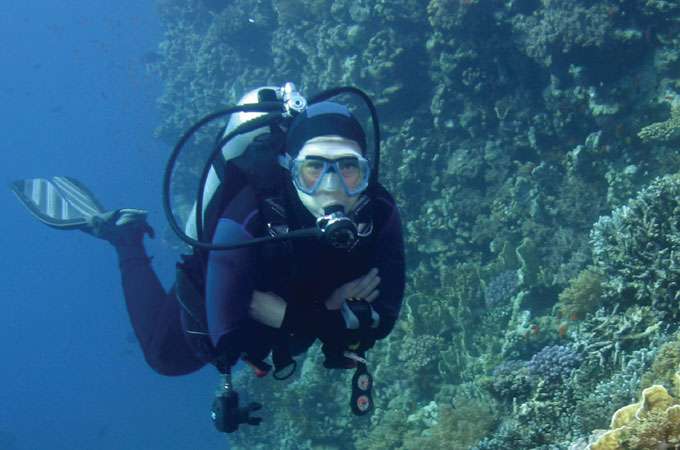 When colonies of tropical snapping shrimp clack their outsized, super-fast claws, the noise is so powerful it stuns their prey—and so loud it can obscure the sound of submarines from sonar. Now Marc Lammers, a postdoctoral researcher at the Hawaii Institute of Marine Biology, hopes the sounds of shrimp and other organisms will give scientists new insight into the health of remote reefs.

Lammers has designed an inexpensive Ecological Acoustic Recorder, or EAR, to listen to remote reefs. He is now working on ways to interpret what he’s hearing.

“So many reef animals make noise, they must be telling us a lot about their condition,” says Rusty Brainard, one of Lammers’ collaborators and chief of the Coral Reef Ecosystem division of the National Oceanic and Atmospheric Administration’s (NOAA) Pacific Islands Fisheries Science Center. “It’s up to us to figure out how to interpret what they are telling us about their condition.”

Coral reefs are under assault by everything from warmer ocean temperatures to algae and seaweed; biologists predict 60 percent of the world’s reefs will be lost by 2030.1 Meanwhile, reefs are often too remote to monitor, scattered in a broad belt ringing the equator. NOAA, which has been charged with monitoring the health of remote Pacific reefs, has been able to send scientists to look at the reefs only every two years, says Brainard.

“We just get a snapshot of each reef,” he says. “For about three days, we have 20 ecosystem scientists surveying the reef. But then there are the other 720 days that go by, when we have no idea what is going on biologically.”

Satellites, buoys, and other remote monitoring stations can measure parameters such as salinity, sea temperature, sunlight, and ultraviolet radiation, but all are proxies for the reef’s organisms themselves. As a PhD student, Lammers worked with underwater acoustics to monitor dolphin communication, so he knew the intricacies of the underwater world and recognized how noise could indicate marine animal welfare. It was natural to make the transition to design a remote reef recorder.

“Most underwater sounds are lost to us,” Lammers says, partly because scuba divers are encased in their equipment, surrounded by the cacophony of their own bubbles. “But reefs are really very loud.” The trick has been figuring out just how to interpret the endless hours of noises on the recordings.

Lammers will use algorithms to map how regularly different sounds occur, and he hopes eventually to relate these patterns to trends in the overall health of reef creatures.

Lammers says the reefs can be equated to a forest. Trees and corals both provide habitat and food for the creatures that inhabit them, but only some of the organisms—such as birds and insects—make sound. “In a way, it is like we are listening for the birds and the crickets to infer how healthy the ecosystem is—is it stable or is it in the process of change?”

The research is still in its early stages, with four recorders located in American Samoa, five in the main Hawaiian Islands, four in the northwestern Hawaiian Islands, and three headed for the western Pacific. The recorders offer one obvious advantage: they are triggered by boat motor sounds, which makes them a natural tool for reserve managers. “Managers are interested in how much illegal fishing and poaching is going on in their reserves. If your reserve is in the middle of the Pacific, you have no other way of knowing what kind of boat traffic there is,” says Lammers.

Nancy Knowlton, director of the Center for Marine Biodiversity and Conservation at the Scripps Institution of Oceanography and a staff scientist at the Smithsonian Tropical Research Institute, says reef signals may be far more complex than we realize. For example, snapping shrimp, the dominant source of most reef sound, can live on dead and live coral, which might negate their ability to signal reef problems. Nevertheless, she thinks Lammers’ approach has promise.