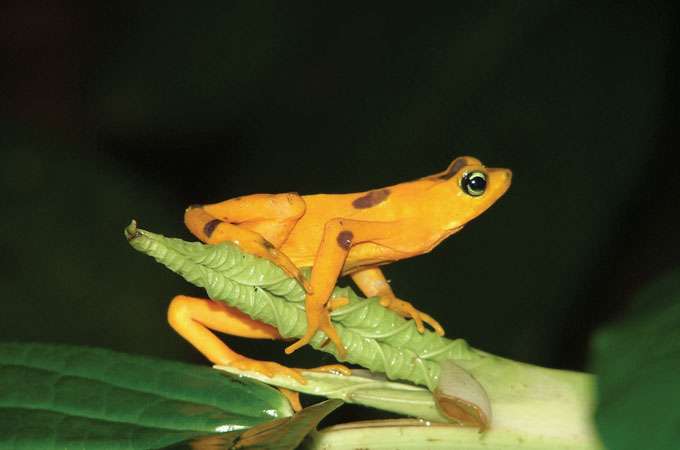 New research blames global warming for the mass extinction of harlequin frogs from Costa Rica to Peru, where two-thirds of the 110 species mysteriously vanished in the late twentieth century, despite habitat protections. The study shows that most of these frogs disappeared after warmer years and that rising temperatures in the tropics are linked to outbreaks of a lethal fungus that grows in the frogs’ skin.

“Climate-driven epidemics are an immediate threat to biodiversity,” say Alan Pounds of the Golden Toad Laboratory for Conservation in Monteverde, Costa Rica, and 13 coauthors in Nature.

Thousands of amphibian species have declined worldwide, with more than 400 classified as “critically endangered” and more than 100 classified as “possibly extinct.” Many amphibians have declined even in protected areas. No one knows exactly why, although outbreaks of the fungus Batrachochytrium dendrobatidis have been implicated in many cases, including the harlequin frogs (Atelopus sp.). These frogs, which belong to the toad family, are particularly suited to solving this mystery because they are brightly colored and are found near streams during the daytime, making them easy to spot.

To investigate whether global warming explained the harlequin frog extinctions, Pounds and his colleagues used a new database produced by 75 researchers that shows when and where various species were last seen. First, Pounds and his colleagues ruled out the prevailing theory (which holds that extinction risk rises with altitude) by showing that the risk is greatest at middle elevations (1,000-2,400 meters). Then they investigated whether the timing of the harlequin frog disappearances correlated with climate changes in the tropics, including changes in air and sea surface temperatures.

The researchers found that climate change was a key factor in the harlequin frog extinctions in the late 1900s. During this time period, the average air temperature in the tropics increased 0.18 degrees Celsius per decade—triple the global rate—and about four-fifths of the vanished species were last seen right after an unusually warm year.

But answering this question raised another one. More frogs died in the mountain highlands or during the winter, suggesting that the fungus is more likely to kill them at cool temperatures. So why did global warming make more frogs go extinct? This apparent paradox is easily resolved. Warming accelerates evaporation, and more water vapor produces more clouds. In turn, more clouds can make nights warmer and days cooler. Both these trends favor the frog-killing fungus in the highlands, where nights can be too cold and days can be too warm for it to thrive.

The researchers tested this scenario for the high-elevation Monteverde cloud forest and found that temperature trends fit: the daily low is rising while the daily high is falling. “With climate change promoting infectious disease and eroding biodiversity, the urgency of reducing greenhouse-gas concentrations is undeniable,” they say.