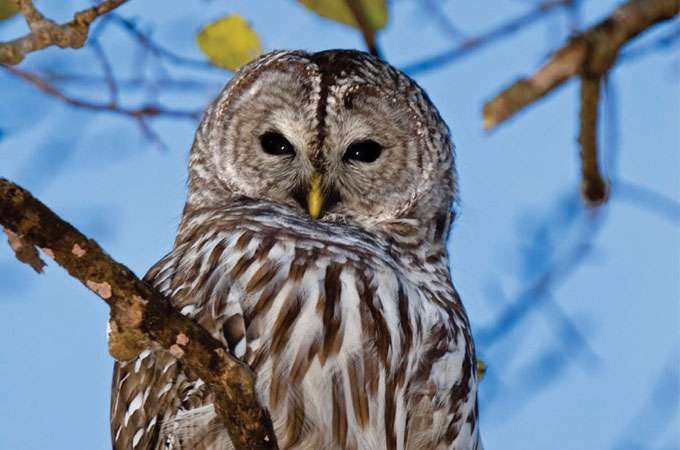 If Dale Joachim’s new invention continues to show promise, cell phones may soon be not only for the birds, but also for the frogs, the bats, and the elephants. He and fellow researcher Eben Goodale have developed a cellular device that lets a person broadcast animal calls into the wilderness and listen for a reply, all from the comfort of a home computer.

Joachim, a professor at the Massachusetts Institute of Technology, came up with the novel idea while listening to an ornithologist lament searching for birds in the Louisiana swamps. To keep track of owl populations, the researcher had to slog along among the mosquitos and alligators, play hoots on a CD player, and wait for a response.

“She was discussing these unpleasant experiments and I said, ‘Why don’t you use cell phones?’,” Joachim said.

So he went about fashioning a way to help biologists remotely survey animals and analyze the results. Joachim’s new device consists of a cell phone, a microphone array the size of a pizza slice, and a megaphone-like speaker. To activate the system, users place the apparatus within range of a cell tower, retreat to a computer terminal, and dial in via a Web site. Then, they command the phone to broadcast particular animal calls into the wild.

After the speaker transmits the sound, the microphone array picks up any responding hoots or peeps and relays them back to the Web site. The device is weatherproof and can run for weeks when plugged into a car battery.

So far, the system has been as effective as traditional survey methods. In a series of experiments, Joachim’s team deployed it in Maine and Connecticut, where they sent out owl hoots. The researchers later revisited the locations and broadcast the same calls via a CD player. The cellular apparatus essentially received as many owl replies as the CD recordings.

Nonetheless, some experts worry about the device’s shortcomings. They point out that cell reception is limited and that the phones can’t pick up bird songs that travel at high frequencies.

Joachim believes he can sidestep those problems by rigging the phones to work like traditional player/recorders when out of tower range. Also, adding a digital recorder to the system would help it pick up most frequencies.

Ultimately, Joachim envisions it as a step toward a new era when cell phones are harnessed to help conservationists track wildlife on an unprecedented scale. To facilitate this, he is willing to give the microphone platforms away for free and plans to open up the system to everyone from weekend birders to professional scientists, with hopes of building a vast online database of animal surveys that tracks populations across huge areas. Such a system could help measure, for example, the health of U.S. frog populations or the whereabouts of invasive species such as barred owls.

“We have people everywhere with cell phones,” Joachim said. “All of these could be agents of scientific measurement.” 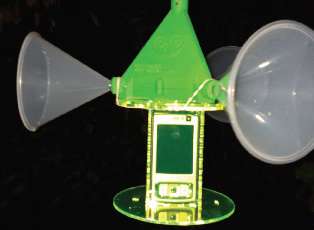 The cellular device hangs from a tree in Connecticut. The plastic cones funnel incoming bird calls to microphones in the green, pyramid-shaped box. The cell phone is encased in clear plastic underneath. (Photo © 2007 Dale Joachim, MIT)
Photo: ©Frank Leung / istockphoto.com