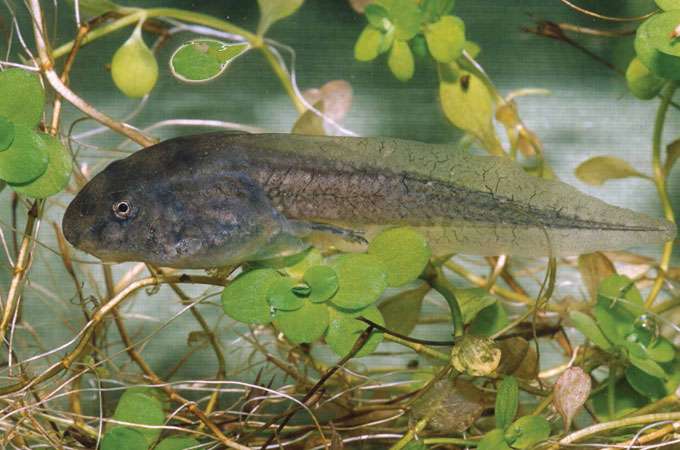 The environmental effects of pesticides may be even worse than we thought. A new study of how pesticides affect wetland species yielded a surprising result: a popular herbicide also kills tadpoles. Realistic concentrations of Roundup® essentially exterminated three out of five frog species tested in simulated ecosystems.

“The most shocking insight coming out of this was that Roundup, something designed to kill plants, was extremely lethal to amphibians,” says Rick Relyea of the University of Pittsburgh in Pennsylvania in Ecological Applications.

Roundup is the second-most common herbicide in the U.S. and is widely used in gardens, croplands, and forests. However, little is known about how pesticides affect natural communities. This is understandable — we can’t just spray ecosystems with toxic compounds and see what happens. We can do the next-best thing, however, which is to see how pesticides affect simulated ecosystems called mesocosms.

Relyea simulated wetland ecosystems by collecting plankton, plants, and animals from wetlands in northwestern Pennsylvania and putting them into 1,000-liter cattle tanks at natural densities. The animals included snails, spotted salamanders, and five species of tadpoles as well as beetle and dragonfly larvae. He then treated the mesocosms with four pesticides: two insecticides (carbaryl and malathion) and two herbicides (2,4-D and Roundup), applying them at the manufacturers’ recommended maximum application rates to simulate direct overspray on a wetland. After about two weeks, Relyea assessed how the pesticides had affected the species in the mesocosms.

Whereas most of the pesticides had the expected effects, Roundup had an unexpected effect. Relyea had predicted that the herbicides would affect tadpoles indirectly by killing the algae they feed on. Instead, he found that Roundup affected tadpoles directly by killing many of them, including all leopard and gray tree frog tadpoles (Rana pipiens and Hyla versicolor) and 98 percent of the wood frog tadpoles (Rana sylvatica). Two kinds of tadpoles were not significantly affected: spring peepers and American toads (Pseudacris crucifer and Bufo americanus).

Monsanto, the manufacturer of Roundup, contests Relyea’s study. The company says that the Roundup formulation tested is specifically intended for terrestrial rather than aquatic uses. Relyea counters that this formulation can — and does — get into aquatic habitats, albeit often inadvertently, during aerial applications. “Few habitats are untouched by anthropogenic effects, including the direct application or drift of pesticides,” he says. Moreover, he has done follow-up work showing that Roundup can also kill terrestrial amphibians; this study is in press in Ecological Applications.

Monsanto also argues that Relyea’s application rate was too high. However, Relyea disagrees, saying that the concentration of Roundup in the meso-cosms was the same as the maximum that other studies have estimated can occur in natural shallow wetlands after application in surrounding areas (3.8 vs. 3.7 milligrams active ingredient per liter). He has since shown that using just one-third as much Roundup can still kill two-fifths of the amphibians.

“I see this as just one more instance of a commonly used pesticide [other examples are atrazine and Sevin] that is allegedly ‘safe’ but has unanticipated consequences,” says David Wake of the University of California, Berkeley, an expert on amphibian declines. Indeed, as Relyea points out, agricultural pesticide use has already been implicated in some amphibian declines.

Relyea, R.A. 2005. The impact of insecticides and herbicides on the biodiversity and productivity of aquatic communities. Ecological Applications 15:618-627.