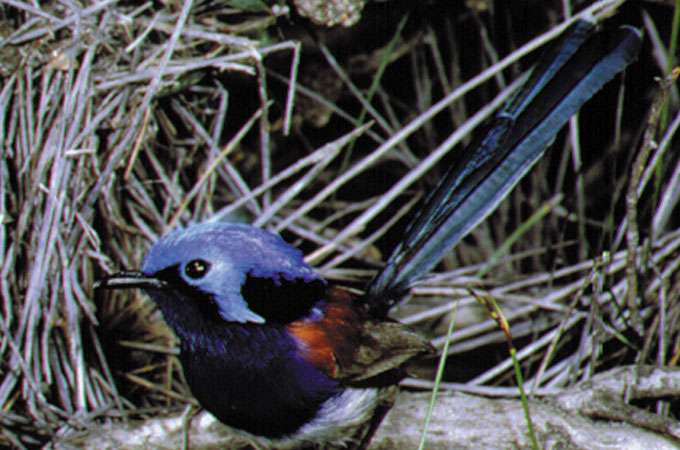 Connections May Be Key to Surviving Fragmentation

For people, being well connected means who you know. For wildlife, it means where they can go. New research shows that the connectivity of fragmented habitat may determine whether its species thrive or die out: populations of an Australian wren can increase in well connected fragments but will drop in those that are not.

Lesley and Michael Brooker of CSIRO Sustainable Ecosystems in Perth, Australia, present this work in a recent issue of Wildlife Research.

Previous fragmentation studies have had conflicting results. Populations in small fragments can seem to do as well as those in larger areas. “The Brookers’ work achieves what conservation biologists have long been seeking: quantitative evidence for the impact of habitat fragmentation on real-world populations,” say James Smith and Jessica Hellmann of the University of British Columbia in Vancouver, Canada, in the September issue of Trends in Ecology and Evolution.

The Brookers were able to get solid numbers on how fragmentation affects populations of blue-breasted fairy-wrens (Malurus pulcherrimus) because the birds are relatively easy to monitor. They live year-round in small territories (about 2 ha) and disperse only to find vacant breeding spots. The researchers banded 666 wrens in 17 fragments (4.5-144 ha) and recorded their movements between the breeding seasons of six consecutive years. Groups of fragments were classified as well or poorly connected dispersal neighborhoods based on the likelihood that wrens could move among the fragments.

In their Trends in Ecology and Evolution paper on the Brookers’ work, Smith and Hellmann extended this analysis to estimate how connectedness affected the population’s growth rate in the 10-fragment neighborhood under both scenarios. They found that when well connected, the wren population grew by about 5 percent per year; however, when poorly connected, it decreased by about 6 percent per year. “When the performance in the poorly connected neighborhood is compounded over successive generations, wren populations there will tend to go extinct,” say Smith and Hellmann.

The ten fragments in this neighborhood covered a range of sizes and differed only in connectedness. Thus, the Brookers’ work shows that the key variable is “the direct effect of fragmentation on bird movements rather than the effect of fragment size on individual performance within patches” say Smith and Hellmann. “The size of patches per se is secondary to persistence.”