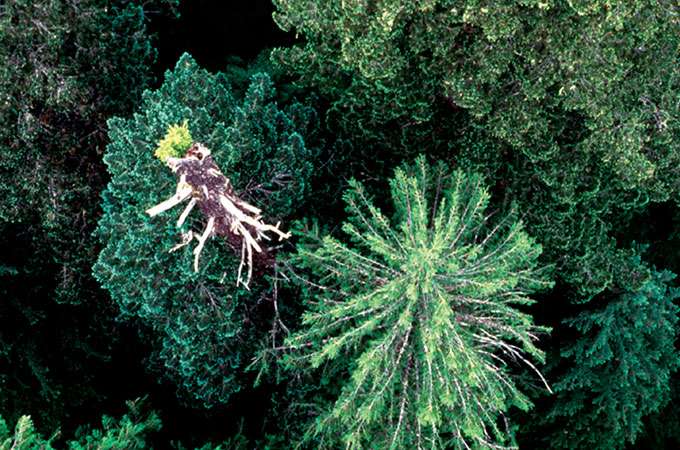 LIDAR systems put everything into perspective

For ecologists, seeing the forest for the trees is a constant dilemma. Satellite and airplane images provide an overall picture of the forest and its boundaries. But the aspects of the forest typically crucial to the health of the local denizens, such as the age, height and density of the trees, often remain hidden. To obtain these particulars, researchers must lug measuring tape, rope, and surveying equipment into the woods and painstakingly perform measurements on individual trees.

A new tool may help put everything into perspective. Known as light detection and ranging (LIDAR) systems, these instruments can provide not only a two-dimensional picture of the extent of the forest but also a full three-dimensional view of the shrubs and trees within. The device has already proven it can identify everything from spotted owl habitat to forest conditions suitable for spawning salmon.

All airborne LIDAR systems operate in pretty much the same way. A pulsing infrared laser is attached to an airplane’s underside. As the plane whirrs along, the laser blinks on and off like a strobe light, sending pulses of light toward the ground. A detector mounted on the plane picks up the light after it reflects off the land. By observing the time difference between when pulses leave and return, researchers deduce the height of objects on the ground.

The first LIDAR systems, built by NASA in the seventies and eighties, used a narrow-beam laser to simply obtain elevation data from directly under an aircraft. LIDAR has evolved since then, and now systems can glean data on large swaths of land with one pass. The most common of the modern commercial LIDAR systems use scanning mirrors to continuously spray the ground to each side of the airplane with a narrow-beam laser—like an automatic sprinkler. Even more cutting-edge devices shine big, house-sized spots of infrared laser light below the plane. Detectors record the many photons from this spot of light as they bounce off the terrain. The result is essentially a plaster relief of the land made from light.

Over the years, LIDAR has primarily been employed as a tool for creating topographic maps. In the late nineties, foresters realized the systems not only retrieved elevation readings of the ground but also of tree tops, low-level vegetation, and everything in between. In short, LIDAR technology provided three-dimensional views of forests and shrubland.

Researchers, like Michael Lefsky at Colorado State University, began to analyze LIDAR data to see whether it could reveal more of what lies hidden beneath forest canopies. They found, among other things, that they could extract readings on the diameter of trees, the relative forest age, and even the amount of sunlight hitting the forest floor. In one study, Lefsky used LIDAR to classify 22 plots of land as young, mature, or old-growth forest, with 100 percent accuracy. To obtain the same accuracy in situ, he would have had to wrap a tape measure around large samples of trees and then bring in ropes, laser rangefinders, and other survey instruments to measure tree height and the depth and extent of the crowns.

With its extensive capabilities validated, LIDAR is now finding its way into the hands of ecologists. Ralph Dubayah, a geographer at the University of Maryland, recently employed LIDAR to measure spotted owl (Strix occidentalis) habitat. In the Pacific Northwest and California, spotted owl populations continue to drop due to the degradation of their old-growth forest habitat. Identifying and mapping owl habitat, however, has always been dismayingly difficult. Using LIDAR, Dubayah and his research team found that owls thrive in forests with tall trees, plenty of canopy cover, and thick vegetation. When these factors fall below specific levels, owl populations plummet. Armed with this knowledge and an advanced LIDAR system, conservationists could now conceivably map remaining owl habitat in North America.

Although they are less infamous than the spotted owl, great tit (Parus major) populations have been waning across England. One of many reasons for the decline of these and other small woodland birds could be the continued development of the English countryside, which gives rise to woodlands that don’t differ much in height or structure. Ross Hill and his colleagues at the Centre for Ecology and Hydrology at Bath Spa University College in  the U.K. used LIDAR to examine the relationship between tree height and nestling weights in relatively untouched deciduous forests near Bath. The study revealed that after a cold spring, great tit babies grow bigger faster where trees are lower on average. Conversely, nestlings thrive in taller trees after a warm spring. These results suggest the birds have a better shot in the long run where canopy height varies. The researchers plan to examine other woodland areas with LIDAR to gain further insights into the decline of bird populations.

LIDAR’s potential extends well beyond bird conservation and could aid in research involving everything from butterflies to bears. David Nash, a geographic information systems (GIS) specialist for Kitsap County, Washington, is monitoring tree cover along salmon- spawning streams to see whether the trees are well-enough developed both to shade salmon eggs and shed ample woody debris, which is needed to form spawning pools. And in Florida, John Brock at the U.S. Geological Survey Center for Coastal and Watershed Studies is using LIDAR’s topographic abilities to precisely map beaches, grasslands, and even shallow coastal waters along East Coast national parkland. One  goal is to study the impact storms, human activity, and climate change have on coastal ecosystems, including shallow coral colonies.

Down the road, LIDAR may even be able to do much more than just monitor individual animal habitats. Long-standing ecological theories have linked forest structure and biomass to biodiversity. Dubayah and his team are now testing these theories. Over the next few years, they will be flying LIDAR over ecological research areas where extensive plant and animal data have been collected. They will try to uncover relationships between forest attributes measurable by LIDAR and the level of species richness. The goal is to use LIDAR one day to measure biodiversity.

Another somewhat futuristic application of LIDAR is forest restoration. LIDAR could be used to map and identify the characteristics that make old-growth forests “old growth.” Then, employing horticultural techniques, researchers could direct the development of newer forests to obtain essential old-growth characteristics in a fraction of the time it would take naturally.

Before LIDAR can become widespread, costs will have to come down significantly. Even basic LIDAR systems go for hundreds of thousands of dollars, and many researchers are still unable to pay for them or the data. Compounding the problem, remote-sensing organizations such as the Management Association for Private Photo-grammetric Surveyors (MAPPS) are lobbying to ensure that everyone from budget-constrained scientists to big logging corporations must buy systems and data from the private sector. Given the remarkable abilities of LIDAR to aid in conservation, however, in the long run it will likely become a standard instrument for ecologists, regardless of such obstacles.

About the Author:
John Weier is a freelance writer based in Seattle, Washington.