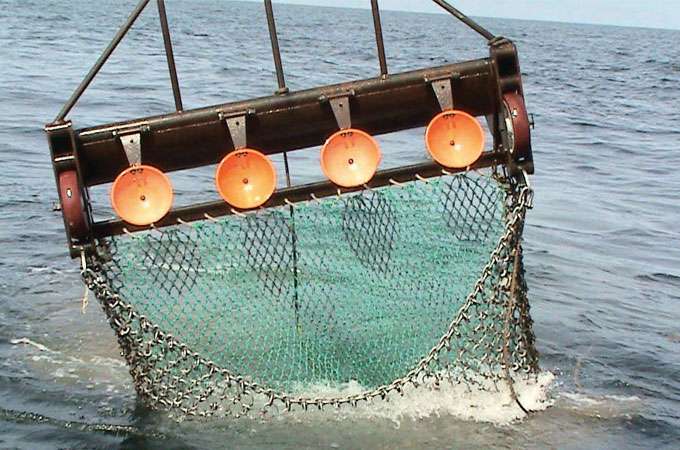 Tasty species live at the bottom of the sea. Plucking these morsels from their habitat, however, is often a violent affair that destroys other denizens of the deep. Now researchers have developed a more benign way to fish.

Trawling is the most widespread form of fishing. But bottom trawling is brutal. It uses an enormous, toothed bar mounted on a device called a dredge to scrape the seabed. Dredging throws the intended catch up into a cloud that is captured by a net trailing behind. Unfortunately, the cloud contains a lot of other stuff. Anything at or just below the surface of the seabed—the benthic zone, in fishery parlance—gets dragged up. The result is that a lot of other types of fish, crustaceans, and molluscs are caught unintentionally.

More worrisomely, sponges, seaweeds and centuries-old coral are destroyed. This is serious because such sessile creatures are not merely part of the ecosystem. In a sense, they are the ecosystem—in the way that it is plants rather than animals that define a forest. Indeed, trawling has been compared to clear-cutting trees. Moreover, from a practical point of view, this destruction of habitat contributes to the dwindling of fish stocks worldwide.

However, in one case—scallop trawling—Cliff Goudey of the Massachusetts Institute of Technology reckons he has a solution. He and his team have designed a dredge that can dislodge scallops without touching the sea floor.

The dredge has several hemispheric scoops in place of the toothed bar. As it is pulled along, the scoops direct water downward. That creates a series of gentle jets that can shuffle the scallops from their resting places—but the streams of water are not powerful enough to damage the benthic zone’s long-term tenants. Also, the scoops swivel out of the way if they encounter anything solid, so the dredge does not destroy such protuberances. Best of all, from the fisherman’s point of view, it takes less effort to float a dredge on water jets than to drag it across the uneven surface of the seabed. That makes Dr. Goudey’s device a more fuel-efficient way to fish than the traditional method.

Having assessed a prototype both in a laboratory tank and in the sea off the coast of Massachusetts, Dr. Goudey was recently invited by the University of Wales to test his invention against a traditional dredge. New and old were dropped from the stern of a trawler and towed across the seabed off the Isle of Man. They each caught the same number of scallops. The new dredge, though, damaged the catch less than the traditional one.

Further tests will take the dredge over the regulatory hurdles toward commercial use. Visserijcoöperatie Urk, a Dutch fisheries-equipment firm, has already expressed an interest in using the new device to catch sole, another bottom-dwelling species. A humble start—but it may yet be worth keeping an eye out for coral-safe scallops next to the dolphin-friendly tuna.

Copyright ©2007 by Economist Newspaper Group and reproduced with permisison via the Copyright Clearance Center.