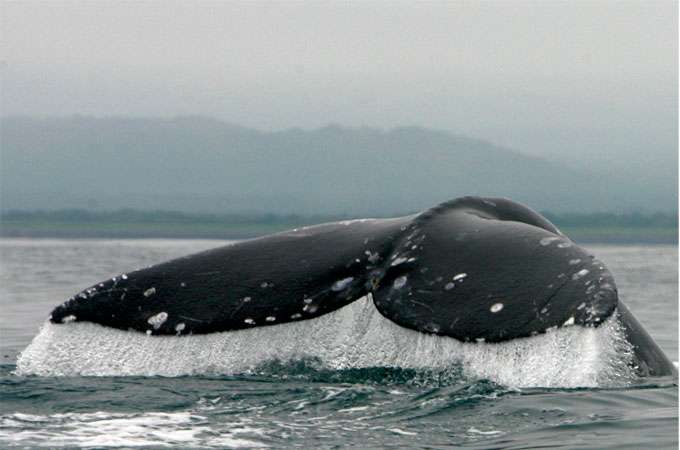 Populations of Pacific gray whales (Eschrichtius robustus) may have been three to five times greater than what they are today, according to researchers at Stanford University and the University of Washington.
Their findings, published in PNAS, lend a cautionary note to the hitherto good news that gray whales had recovered from the abyssal lows of the 1850s and 1900s, when hunting nearly wiped out the species. The eastern population had been deemed so robust that in 1994 the gray whale was the first marine mammal taken off the U.S. Endangered Species List, after yearly censuses had found 20-25,000 animals.

Old records from the whaling industry (and the new computer models based on them) suggested that such numbers were close to prewhaling levels. Indeed, when malnourished whales began to show up and die all along the U.S. West Coast in 1998 and 1999, some scientists wondered whether the gray whale had reached its carrying capacity.

Now, it turns out that both the calculations and the assumptions were wrong. “Historic data [from whaling records] are often incomplete or inaccurate,” says Elizabeth Alter, lead author of the study. She and her coauthors estimate that as many as 118,000 animals may once have roamed the Pacific—far more than the 22,000 from the last count.

Alter let the whales tell their own story, in a sense. She took tissue samples from 42 animals and surveyed the genetic diversity at ten different spots on the genome. What she found was that the variation at those spots was higher than would be expected if past populations had been as small as they are today. This is because small populations are often subject to genetic drift, which tends to decrease variation. But larger populations, which have a higher incidence of mutation, show more variation.

The revised estimates should not come as a huge surprise. Previous genetic surveys of the Atlantic humpback, minke, and fin whales found similar patterns of underestimated historical population sizes.

In the case of the gray whales, these new numbers bring with them a host of management implications. If there are far fewer whales than before, then deeming them fully recovered is premature. Managers, the authors write, need to take better care to prevent accidental deaths and mishaps. And perhaps hunting quotas should be reduced, although such a move would be controversial.

However, several questions still nag. Is 100,000 whales a realistic recovery goal? And what of the malnourished whales? Alter suggests that the limiting factor is probably climate change. The whales’ food supply may have been reduced, or it may have shifted. Either way, the effects are pronounced. Whale populations, the authors note, will be able to grow as long as the environment permits. But whether the environment in its current state will permit that growth is another matter.