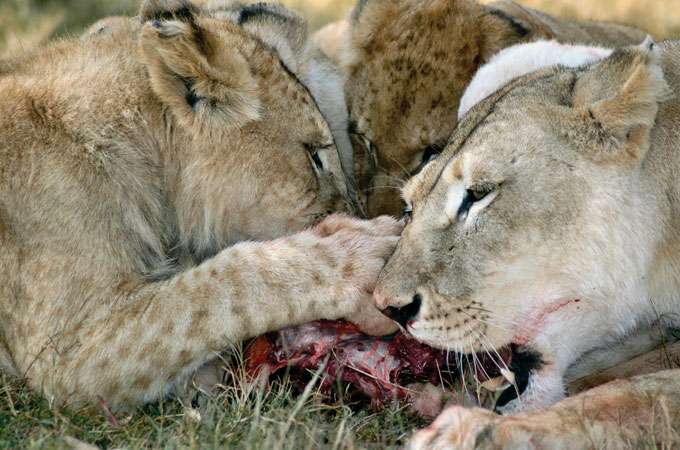 Killing a few lions may help the rest survive. New research suggests that relatively few lions are responsible for most of the livestock kills on African ranches, which means that targeted lion-culling could ease conflicts with ranchers and thus benefit the species as a whole.

The findings also suggest that livestock killers are deterred by the traditional husbandry method of enclosing herds in thornbush corrals (bomas) at night. Preying on livestock in bomas entails developing hunting behaviors that are not natural, such as leaping into the corrals.

Helping lions and people coexist is key to conserving these great cats. Northern Kenya’s Laikipia District is a good test case because it has many lions (more than 100) and because the cattle, sheep, and goats greatly outnumber wild prey such as zebras and buffalo. While Laikipia ranchers are well known for supporting conservation, they can — and do — legally kill lions to defend their livestock.

To see how this lethal control affects the Laikipia lion population, Woodroffe and Frank radio-collared 58 lions on 11 ranches over four years (1998-2002). Sixteen of the lions were captured while returning to livestock kills. The researchers assessed the survival of the collared lions as well as that of their young.

“By showing that there are raiders of livestock and foragers of natural prey, it means that local herders will be justified in concentrating removal efforts on some lions instead of all lions,” says Joel Berger of the Wildlife Conservation Society, who studies wolves in Yellowstone.

The results also showed that female stock-killers had fewer young. Lionesses captured at livestock kills had only a quarter as many cubs as those captured elsewhere (0.23 vs. 0.98 cubs per female per year, respectively). Moreover, fewer stock-killers’ cubs survived to become yearlings, compared to the cubs of lionesses not captured at livestock kills (33 percent vs. 88 percent, respectively).

Based on their findings, Woodroffe and Frank estimated that the lion population studied was dropping five percent per year. However, lion shootings were concentrated in one ranch: each year, 40 percent of the lions that went to this “problem” ranch were shot, compared to only 13 percent of those that never went there. The researchers attributed this to the fact that the problem ranch corralled its livestock in portable wire mesh enclosures rather than in the traditional “lion-proof” thornbush bomas. In support of this hypothesis, the researchers have since shown that no lions have been shot on this ranch in the last two years, thanks to the adoption of a new type of enclosure that is both portable and lion-proof.

“By demonstrating that traditional practices of livestock protection are more effective than others, Woodroffe and Frank offer a rationale for conserving dangerous carnivores outside of reserves,” says Berger.