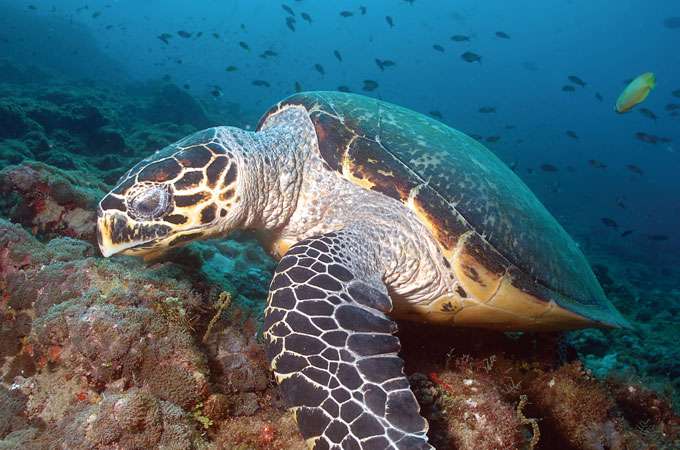 The current strategy for conserving sea turtles—protecting them and their eggs—may be inadequate for hawksbills, which are classified as critically endangered. New research shows that unless we also protect the increasingly rare beach forests in the Caribbean, there may not be enough male hawksbills to maintain stable populations.

Sea turtle sex is determined by incubation temperature, with cooler nests producing mostly males and warmer ones producing mostly females. Many beaches are known to produce mostly female hawksbill turtles (Eretmochelys imbricata); for example, in a U.S. Virgin Island study, all the hatchlings were female in 49 out of 51 nests, and more than 90 percent of the hatchlings were estimated to be female in a study in Bahia, Brazil.

But no one knew until recently whether there were also male-producing beaches, say Stephanie Kamel and Nicholas Mrosovsky of the University of Toronto in Ecological Applications.

Unlike other sea turtles, hawksbills often nest in or along beach forests, and the researchers predicted that these nests would be cooler and thus produce mostly males. To test their prediction, the researchers studied a forested hawksbill nesting beach on Marie-Galante, a small Caribbean island. The study beach is roughly three kilometers long, with a ribbon of open sand up to nine meters wide and a dense forest about 30 meters wide. The researchers monitored temperatures at two nest depths (30 and 60 centimeters) at five sites, each extending from a relatively open area to the forest border and then into the forest proper. In addition, they recorded the number of nests in each type of vegetation as well as in open sand.

Over the course of the three-year study, the hawksbill turtles vastly preferred laying their eggs in vegetated areas. About one-fifth of the nests were in the forest and most of the rest were in the forest border or in beach grass or creeper; fewer than one-tenth were in open sand.

Moreover, the researchers found that forest sites were, indeed, cooler than those in sandy stretches. In 2004, for example, forest nests were nearly two degrees Celsius cooler than those in open sand (about 27.5 vs. 29.4 degrees Celsius, respectively, at 30 cm). This temperature difference is enough to affect the sex of the hatchlings. The sex ratio is 50-50 at the pivotal incubation temperature of 29.2 degrees Celsius, but just a fraction of a degree up or down is all it takes to tip the clutch to mostly females or mostly males.

But Caribbean beach forests are disappearing fast, as coastal development replaces the historical norm of narrow, sandy strips fringed by thick forests, with expanses of white sand. ‘Nesting beaches per se may still remain, giving the illusion of critical habitat, but systematic destruction of forested areas could be catastrophic for hawksbill demography and continued survival,’ say the researchers.