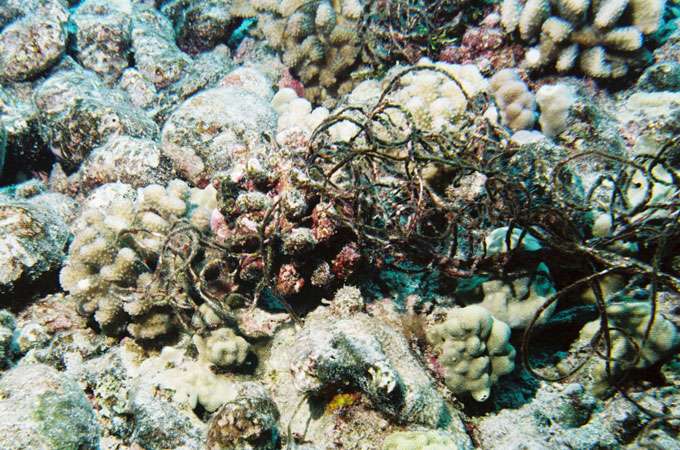 While not as dramatic as dynamite or poison fishing, cast-fishing can still be deadly to corals in reefs. New research in the Hawaiian Islands shows that reefs off popular cast-fishing sites have up to twice as many damaged and dead coral colonies than those that are not fished.

“Seemingly small effects of individual fishers may accumulate over time and cause a significant negative impact on the health and survival of corals within fished zones,” say Kazue Asoh, Tomoko Yoshikawa, Randall Kosaki, and Elizabeth A. Marschall in the December 2004 issue of Conservation Biology. Asoh did this work while at Ohio State University, Columbus, and is now at Ochanomizu University in Tokyo, Japan; Yoshikawa did this work while at the University of Hawaii, Manoa, and is now at Tokyo Medical and Dental University; Kosaki is at NOAA’s Northwestern Hawaiian Islands Coral Reef Ecosystem Reserve; and Marschall is at Ohio State University.

While dynamite, cyanide, and other destructive ways of catching coral reef fish are infamous for damaging coral, the impact of monofilament fishing lines is little known. “It has been presumed that the effects of individual fishers are small,” say Asoh and her colleagues. However, recreational fishermen cut lines when they get tangled in coral, and they discard old lines by casting them into sea, where they can become entangled in coral. As these entangled lines are swept by ocean surges, they abrade corals and thus kill polyps. Determining how cast-fishing affects reefs is important because the sport is expanding rapidly in many tropical areas.

The researchers assessed cauliflower corals for monofilament fishing line damage at seven shore-cast-fishing sites on three Hawaiian islands-Hawaii, Maui, and Oahu. Cauliflower coral typically comprises more than 90 percent of the reefs at popular fishing sites on the main Hawaiian islands. For each site, the researchers compared both colony damage and fishing line entanglement in zones that were designated fished or unfished.

The good news is that it could be fairly easy to protect reefs from cast-fishing. Popular cast-fishing sites are usually small, which means it would be feasible to hire divers to remove entangled lines and to post signs asking fishermen not to throw old lines into the sea.