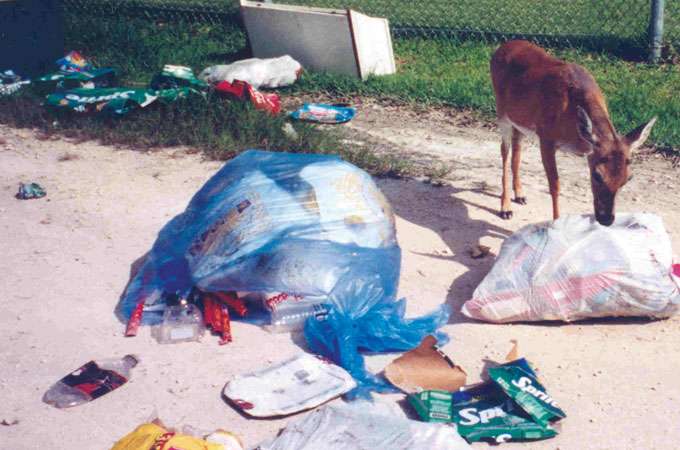 People who feed wild animals can inadvertently take the “wild” out of “wildlife.” New research shows that providing food and water to Florida’s Key deer has led to behavioral changes, substantially increasing their density and group size. Ultimately, domestication could also lead to genetic changes.

“Losing the ‘wildness’ in wildlife is as permanent as extinction,” say Nils Peterson, Edward Laurent, and Jianguo Liu of Michigan State University; Roel Lopez and Nova Silvy of Texas A&M University; and Philip Frank of the U.S. Fish and Wildlife Service in Conservation Biology.

The Key deer (Odocoileus virginianus clavium) is an endangered white-tailed deer subspecies unique to the Florida Keys. There are roughly 700 deer living on 20-25 of the islands, and about two-thirds of them live on Big Pine Key, the only island that has fresh water year-round. Giving food and water to the deer is a common but illegal practice. People put vegetables, dog food, and water outside in pet dishes or self-filling troughs.

The researchers found that, when provided with food and water, Key deer tolerate higher densities and bigger social groups. The density of deer was six times greater, and large groups (3-20+ deer) were nearly four times more common, in the food-and-water plots than in the randomly selected plots. Over time, such domestication-induced behavioral changes could also lead to genetic changes. For example, the deer could lose their unique ability to tolerate salty water, which is all that is available naturally after hurricanes or major storms in most of their range.

The people who provided food and water treated the deer as pets, referring to them by name and saying they looked hungry. To avoid the ill will that would undoubtedly arise from prosecution for illegal feeding, the researchers recommend that managers instead explain to local people the downside of this practice. “For those who value ‘wildness’ in wildlife, domestication of wildlife species is a serious problem that must be addressed,” say the researchers.