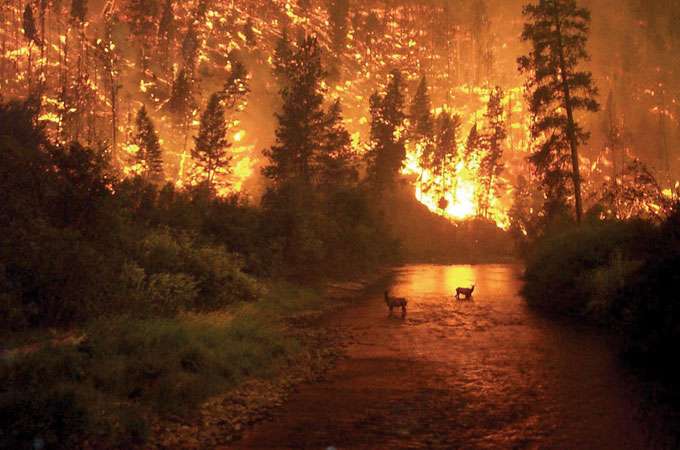 New research suggests that we have missed the underlying reason why many wildfires in the western U.S. have gotten more intense. Climate change often plays a key role, making the fire season longer and drier.

The growing intensity of western wildfires is generally attributed to past fire suppression and consequent fuel buildup. But the role of climate change means that “ecological restoration and fuels management alone will not be sufficient to reverse current wildfire trends,” say Anthony Westerling and three coauthors in Science. Westerling did this work while at Scripps Institution of Oceanography in La Jolla, California, and is now at the University of California, Merced.

In the most comprehensive study of ties between wildfires and climate, the researchers analyzed 1,166 large forest fires occurring in the western U.S. between 1970 and 2003; each of the fires burned at least 400 hectares. The study accounted for fire factors (including frequency, burn size, location, and fire-season length) as well as for climate factors such as snowmelt timing and spring and summer temperatures.

Climate analysis revealed that the worst wildfire years typically had earlier snowmelts and warmer springs. Other researchers had previously shown that snowpacks are melting one to four weeks earlier than they did 50 years ago, resulting in longer summer dry seasons. During the study period, early snowmelt years averaged nearly two degrees Celsius higher in April and had five times more fires, which burned roughly 20 times more forest.

Further strengthening the case that climate is the main reason for the increase in wildfires in the western U.S., evidence showed that the fires were concentrated in the Northern Rockies. This region had a disproportionately high fire frequency, accounting for 60 percent of the increase in large fires documented after 1987. This is significant because fire suppression had little impact on wildfire risk in the Northern Rockies’ lodgepole pine and spruce fir forests where infrequent, intense crown fires were the norm until recently.

The researchers emphasize that overabundant fuels also contribute to wildfire increases in regions that historically had frequent, less-intense surface fires, including southwestern ponderosa pine and Sierra Nevada mixed conifer forests. But even such naturally fire-prone forests are at the greatest risk of burning when spring comes early and the summer is warmer and drier. “Although land-use history is an important factor for wildfire risks in specific forest types, the broad-scale increase in wildfire frequency across the western United States has been driven primarily by sensitivity of fire regimes to recent changes in climate over a relatively large area,” say the researchers.