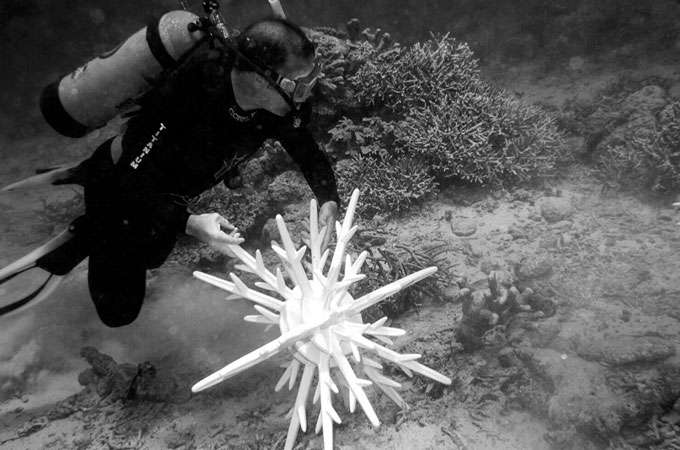 By Michael Moore and Mark Erdmann

Karang Palsu, or fake coral, was the best term we could find when trying to describe a new artificial reef system to local community members in Bunaken National Park, Indonesia. We were asking their permission to conduct a 3-year pilot project to restore local reefs damaged by blast fishing. The building blocks of this restoration technology are spiny, snowflake-shaped pieces of ceramic that interconnect to mimic natural reef thickets of branching Acroporid corals, typical pioneering species in barren reef areas of the Pacific.

EcoReefs is quite unlike any other reef restoration tool to date in that it was designed not only to meet the ecological needs of reef fish and young corals but also to look natural and be economically feasible for large-scale restoration projects.

Local officials, dive operators, park rangers, and villagers, all concerned about repairing damaged coral reefs, enthusiastically supported the initiative. In less than a week, the EcoReefs system was cleared through customs and deployed on a section of damaged reef. Now 8 months later, the small demonstration reef is flourishing with both transplanted and naturally recruited corals. A variety of benthic invertebrates and a wide range of fish species are also among the new recruits.

Coral reef restoration is still in its infancy, lagging far behind forest and exist, and little research has been done to compare biological performance, stakeholder acceptance, and long-term cost-effectiveness of different methods.

In the past, artificial reef restoration efforts have relied on sunken ships, cars, tires, and various shapes and sizes of concrete to act as an anchor for transplanted coral or to provide a substrate for coral recruitment. However, marine conservationists are now realizing that these structures rarely contribute to the reestablishment of a functional biological reef. Moreover, they tend to permanently structure the reef in an unnatural and unsightly way, in some cases degrading the tourism potential of the restored site. Materials such as metal or concrete are chemically reactive in seawater and can interfere with coral settlement and growth. Worse yet, artificial reefs made from ships or industrial waste can slowly leach pollutants that are toxic to marine organisms (e.g., petrochemicals, PCBs, and heavy metals).

In an attempt to move beyond these “junkyard” reefs, various alternative techniques have been tested. One uses electrolytic precipitation of limestone from seawater onto continuously electrified metal structures. However, this approach is unaesthetic and impractical at large scales. Other recent experiments using underwater rock piles to stabilize coral rubble fields show some promise as a low-tech, low-cost restoration method; but they are unlikely to work in areas that have high wave action or are on a slope—both of which are common characteristics of reefs.

The promise of the EcoReefs system lies in its simplicity. Unglazed ceramic stoneware is ideal for invertebrate settlement since it is chemically inert, non-toxic, and has a microporous texture. The snowflake design maximizes the surface area available for recruitment, including abundant vertical surfaces that are generally preferred by invertebrate larvae. The branching spines interlink to create a spatially complex habitat that can house small reef fish and juvenile fish. Providing habitat for small fish helps establish an ecological balance between herbivorous fish and fast-growing algae, which if allowed to flourish would soon smother and kill young coral recruits. Small fish habitat is also important for restocking depleted fisheries because it can allow juveniles to evade predation.

Corals have great difficulty naturally colonizing loose or sandy substrates because young colonies are easily overturned, abraded, or buried. Transplanted live coral doesn’t fare well either. It is often difficult to anchor the transplants such that they stay high enough off the bottom that they don’t become buried or scoured by moving sand.

The branching design of the modules allows you to fasten and orient transplanted coral fragments with nothing more than a simple cable tie. Experience shows that transplanted fragments will quickly cement to the structure by laying down living tissue over the ceramic spines and will resume growth in a matter of weeks. To further enhance coral recruitment, settling plates at the center of each module create a shaded microenvironment.

Finally, EcoReefs combines aesthetic appeal with function. This is particularly important in marine reserves or popular dive destinations. In the short term, even large-scale deployments look natural, especially with live coral transplants on the modules. In the long term, the branching design (combined with the inherent fragility of ceramic) allows the modules to fragment and disperse as living corals colonize them. Broken module branches will become incorporated into reef sediments or can help establish new coral colonies. In this respect, EcoReefs imitates the life history of branching coral colonies. Ultimately, biological reef will overtake and replace the ceramic structure, leaving minimal long-term evidence of human intervention.

By speeding up the reestablishment of a diverse reef community, reef restoration projects can bring damaged reefs back into economic service and help reduce pressure on existing healthy reefs.

In Indonesia and the Philippines, the economic benefits of healthy reefs in areas with tourism potential can be as much as US$270,000 per square kilometer per year. In the reef zones most heavily used by sport divers and subsistence fishers, annual valuations are even higher, ranging to thousands of dollars per square meter. Clearly, it makes good economic sense to attempt restoration if it can shorten recovery times for badly damaged, nonproductive reefs with high potential value.