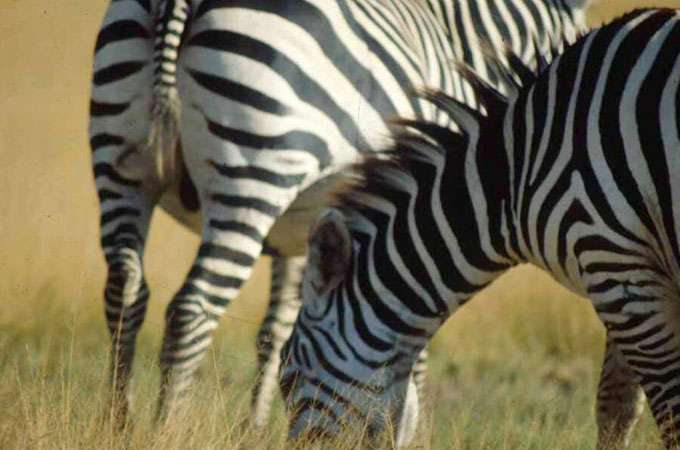 Most large wild animals in East Africa live on grazing lands, raising the question of whether conservation is compatible with livestock production. The answer will depend on how different species affect each other and the land they share. New research suggests that, although cattle deter zebras from using savannas, this can be mitigated by adding elephants into the mix.

“The fate of biodiversity outside of protected areas may depend on the strength of interactions between wildlife and livestock,” says Truman Young, who presents this work in the March 2005 issue of Biological Conservation with Todd Palmer and Michelle Gadd; the three researchers did this work while at the University of California at Davis.

Zebras are a good test case of wildlife-livestock interactions for two reasons: they are among the most common large herbivores in African savannas, and zebras and cattle prefer many of the same foods and habitats.

To investigate how wildlife and livestock affect each other on East African savannas, Young and his colleagues used fences that allowed or excluded various combinations of herbivores (notably zebras, elephants, and cattle) in 18 4-hectare plots at the Mpala Research Centre in Laikipia, Kenya. Cattle use approximated the stocking rates on the surrounding land (11-15 animals per square kilometer), and the researchers compared each herbivore’s use of the study plots on the basis of dung density. In addition, they surveyed the cover of grasses and other plants in the study plots.

During the first five years of this ongoing study, Young and his colleagues found that cattle make zebras less likely to use savannas. In one trial, plots with cattle grazing had only 70 percent as much zebra dung as those without cattle. “Our data demonstrate a strong suppression of zebras by cattle,” say the researchers.

“Our study is a step toward more accurate assessments of the costs of each land use on the others, which would have to be mitigated in any effective mixed-use strategy,” says Young.