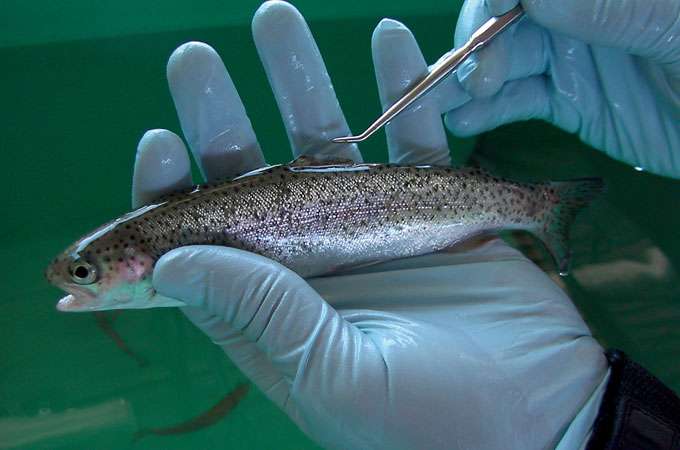 Email, Phone, Data: All in One Fish

For years we’ve had cell phones that take pictures and personal digital assistants that surf the Web and play music. If only we could put something like that on a fish to record its worldwide wanderings and send an occasional, fact-filled email. Consider it done. Almost.

The US$136-million Ocean Tracking Network, funded by the Canadian government and housed at Dalhousie University in Nova Scotia, will in effect equip fish with BlackBerry-like mobile devices that can store and send data via an array of sensors on the sea floor. It will even transmit data from one fish to another.

Researchers have been tagging and monitoring fish for decades, but with spotty results. For the most part, the habits and whereabouts of fish in the oceans have remained one of many mysteries of the deep. Much of what we do know about fish is from commercial and sport-catch recordsówhich, ironically, means killing fish to learn they need to be saved.

The Ocean Tracking Network merges the acoustic-sensing technologies of two of the most successful electronic fish-tagging methods: the Pacific Ocean Shelf Tracking Project (POST) and the Tagging of Pacific Pelagics (TOPP).

POST researchers surgically implant acoustic transmitters the size of an almond into Pacific Northwest salmon smolts and California sturgeon. As the fish migrate through the oceans, the transmitters send out acoustic signals that are picked up by sensors strung in a trapline across the continental shelf. Sensors detect fish as they pass between Oregon and the north end of the Alaska panhandle. The tags’ unique code identifies each individual fish and its location. “It’s like an acoustic bar code,” says Ron O’Dor, a Dalhousie professor and senior scientist for the Census of Marine Life, the network’s principal researcher.

TOPP uses tags similar to computer memory sticks, collecting data from fish and marine mammals as they move and recording data such as depth, temperature, salinity, light, and location. The data are then beamed to an ARGOS satelliteóeither when the animal surfaces, the tag pops off, or the animal is captured and the tag recovered. More than 2,500 animals and nearly two dozen species have been tagged in the eastern Pacific Ocean. Researchers receive reports from hundreds of animals daily, says Barbara Block, TOPP principal investigator and a marine sciences professor at Stanford University.

But both systems have drawbacks. Because they have a range of about half a kilometer, POST’s acoustic tags require numerous sensors and are limited to the shallower waters of the continental shelf. The TOPP tags’ radio signals can’t transmit more than a few meters in saltwater and work best with animals that surface regularly. The best aspects of each are the relatively easy communications power of POST and the rich archiving ability of TOPP.

“Putting them all together in one package is the challenge the community wants to take on with the industry,” said O’Dor, a regular BlackBerry user himself. For example, he envisions putting receivers on nontargeted fish such as salmon sharks; they can receive data from tagged fish they encounter and download that data to another receiver on their travels. A shark might even receive data from a fish it has eaten.

The plan is to go global and install tags and sensors in 14 ocean regions on all seven continents. Thus, researchers who spot a tuna off Nova Scotia might learn it was seen months earlier in the Mediterranean. By detecting thou-sands of fish over several years, researchers hope to inform fishery management decisions. Over time, the network might also reveal how global warming changes fish movements.