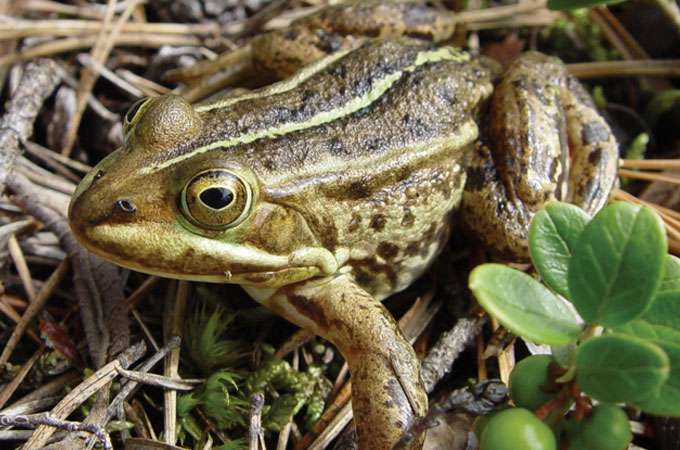 Figuring out which species are native could be harder than we thought. Although pool frogs in Britain were long thought to have been introduced from nearby countries, new research suggests that some populations were actually native. This flip-flop in conservation status makes them the U.K.’s most endangered amphibian rather than just another exotic. And it raises some troubling questions about conservation priorities.

Determining whether a species is native “has dramatic implications for management, potentially making the difference between programmes of eradication or conservation,” say Trevor Beebee of the University of Sussex in Brighton, U.K.; John Buckley of The Herpetological Conservation Trust in Bournemouth, U.K.; Ivor Evans of the University of Greenwich in London, U.K.; Jim Foster of English Nature in Norwich, U.K., and seven coauthors in Biodiversity and Conservation.

According to conventional wisdom, all British pool frogs (Rana lessonae) were introduced from continental Europe, where the species is widespread. But three findings suggest that the population in Norfolk is native rather than introduced. First, in the mid-to-late 1900s, small populations of unusual pool frogs were found in Norfolk and in Norway and Sweden. Second, historical accounts suggest that pool frogs were already in the Norfolk area before the first recorded introductions in the early 1800s. And finally, the pool frogs from these three areas are mostly brown, whereas those from the rest of Europe are mostly green.

The researchers present several additional lines of evidence that the Norfolk pool frog is indeed a British native. Notably, they compared the nuclear and mitochondrial DNA of pool frogs from 10 areas: two U.K. counties (Norfolk and Surrey, where the species was introduced a century ago), six European countries (France, Hungary, Italy, The Netherlands, Poland, and Switzerland), and two Scandinavian countries (Norway and Sweden). The genetic analyses showed that the Norfolk frogs were more similar to the Scandinavian frogs, whereas the introduced Surrey frogs were more similar to those in the rest of Europe.

In addition, the researchers compared recordings of Norfolk frogs to those of Scandinavian and continental frogs. The mating-call analysis showed that, once again, the Norfolk frogs were more similar to the Scandinavian frogs than to those in the rest of Europe.

Although it may seem surprising that the Norfolk frogs are closest to the Scandinavian frogs, there is a plausible explanation. The researchers speculate that a wave of migrating pool frogs reached Norfolk and Scandinavia when Britain was still connected to the European continent by a land bridge and that Norfolk frogs were then isolated when rising sea levels separated the U.K. from the mainland. In support of this scenario, the authors note that Norfolk populations of a water beetle (Hydroporus glabriusculus) are also closest to Scandinavian populations.

The Norfolk pool frogs became extinct in the 1990s, and, based on this work, the researchers now plan to reintroduce them from Scandinavia. If successful, this would double the number of species of native frogs in the UK—from one species to two.