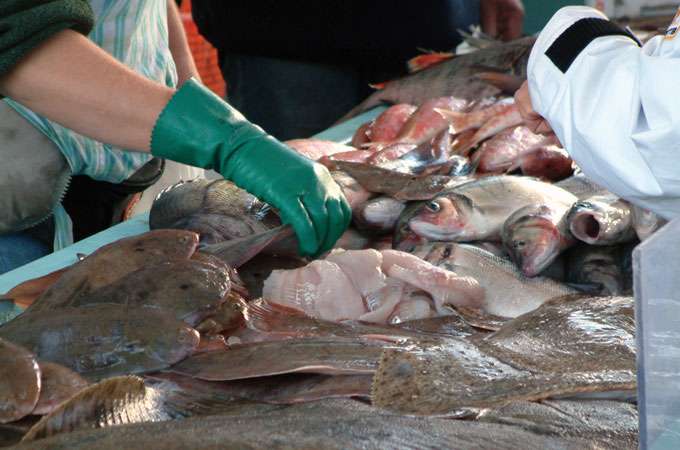 Even a Billion Flatfish Are Still Inbred

Huge populations may not be enough to safeguard commercially fished stocks against genetic risks. New research shows that, even though there are a billion plaice (Pleuronectes platessa) in the North Sea, this flatfish is still inbred. This is because the breeding population is naturally much smaller than the total population and is presumably made even smaller by trawling on spawning grounds.

“The potential for inbreeding may be inherent in the life history of plaice but is only likely to become an issue under severe exploitation,” say Galice Hoarau of the University of Groningen in The Netherlands and eight coauthors in Proceedings of the Royal Society: Biological Sciences.

Although plaice have been heavily fished for a century, the focus has shifted from catching youngsters on nursery grounds to trawling adults on spawning grounds. Plaice have been trawled industrially in the North Sea since the 1960s, and stocks there have declined considerably, dropping 50 percent off Iceland in just 10 years. Several years ago, Hoarau and his colleagues found evidence that North Sea plaice might also be inbred.

The researchers followed up this finding by analyzing DNA from plaice otoliths (ear bones) in preserved specimens collected by fisheries institutes in Iceland and The Netherlands between 1924 and 1970 and off Iceland and in the North Sea in 2002. They assessed the Iceland and North Sea populations for genetic diversity, effective (i.e., breeding) population size, and in-breeding.

The results indicate that plaice populations have not lost genetic diversity in either North Sea or Iceland waters during the twentieth century. Moreover, both populations are enormous, with about 100 million and 1 billion adults, respectively.

However, the rest of the picture is not so rosy. The breeding populations are surprisingly small, estimated at fewer than 20,000 for the North Sea and at only 1,700 for Iceland. Worse, genetic analysis indicates that both populations have been inbred since at least the 1970s.

“It is unexpected that such a common fish is inbred,” says Filip Volckaert, a fish population geneticist at Leuwen University in Belgium. “But that just tells us how little we know about the breeding biology. What really happens on the spawning grounds?”

The answer could be the key to resolving the apparent paradox of a population that is both vast and inbred. Like other “type-III” commercially fished species such as herring and sole, plaice are thought to have little or no social structure. But this may not be true. There is evidence that spawning groups consist of close relatives and that females choose mates, suggesting that flatfish mating may not be random after all. Furthermore, mating may be even less random due to trawling on spawning grounds, which could both disrupt courtship and wipe out spawning groups.

“The emergence of inbreeding coincides with the development of industrial-scale fishing on the spawning grounds in the 1960s,” say Hoarau and his colleagues. “We recommend that fishing on spawning grounds be restricted.” Likewise, these findings may apply to the many other commercially fished type-III species that are also assumed to lack social structure. “Our demonstration of inbreeding signals the need for understanding the social and mating behaviour in commercially important fishes,” say the researchers.