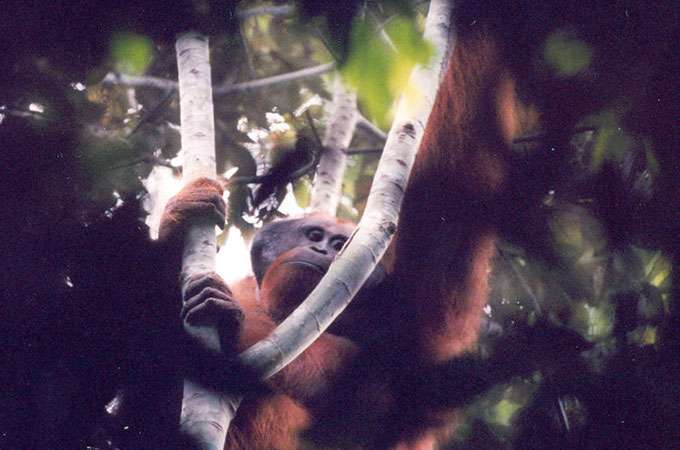 Even Hand-Logging Can Threaten Orangutans

Hand-logging is thought to be relatively conservation-friendly because it doesn’t use heavy machinery. But that doesn’t mean it’s benign. New research shows that hand-logging may threaten orangutans by breaking up the forest canopies where they live and by harvesting the large fruit trees where they prefer to eat.

Hand-logging may also affect female orangutans more severely than males, which could further hasten the population’s decline, say Annika Felton, who did this work while at Uppsala University in Sweden and is now at the Australian National University in Canberra, and three coauthors in the November 2003 issue of Biological Conservation.

Bornean orangutans (Pongo pygmaeus pygmaeus) have declined by as much as one half since the mid-1980s, largely because they have lost about four-fifths of the forests where they once lived. In addition, the forest thought to have the largest remaining population of Bornean orangutans was recently hand-logged illegally.

The results also suggest that the logging had a bigger effect on females than on males. The researchers encountered fewer adult females in the logged forest than in the unlogged forest (three vs. eight, respectively, during the study period). In addition, the logged forest had more nests that were within ten meters of the ground and so were presumably built by males (26 percent vs. 17 percent ).

Felton and her colleagues found two major changes in the logged forest that could explain why hand-logging affects female orangutans more than males. First, the logged forest had twice as many canopy gaps as the unlogged forest. Orangutans travel through the tree tops and when gaps are too big to cross, they have to go along the edges instead. This takes more energy, which presumably affects adult females more severely because they need extra energy to bear and raise young.

Second, the unlogged forest had a fifth fewer large fruit trees than did the logged forest. This means the females have to travel even farther to get the extra energy they need. “These two factors together may affect [orangutan] birthrates and hence the population recovery,” says Felton.