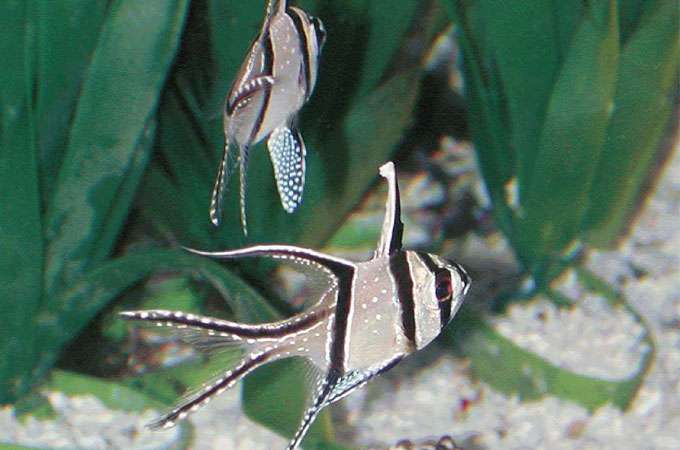 Catching coral reef fish for the aquarium trade used to mean using cyanide or even dynamite, which destroyed much of the reef ecosystem. Today, the trend is to use nondestructive methods such as hand-net fishing, and fish importers argue that this means coral reef fish can be harvested continuously — but new research suggests otherwise.

“The phrase ‘nondestructive fishing methods’ often used by those in the aquarium trade may actually be highly misleading with respect to the conservation status of reef fish,” say Niclas Kolm and Anders Berglund of Uppsala University in Sweden in the June 2003 issue of Conservation Biology.

Coral reefs have the greatest diversity of fish worldwide, and many species are unique to particular reefs. Prized for their bright colors, coral reef fish are harvested by the hundreds of thousands each year. Although nondestructive fishing methods are clearly an improvement over cyanide and dynamite, they are not necessarily benign, and little is known about their effects on fish populations.

Kolm and Berglund studied the effects of a nondestructive fishing method on the Banggai cardinalfish (Pterapogon kauderni), which is about 5 cm long and is silver with black stripes. Popular in North America, Japan, and Europe, the fish has been found only in the Banggai archipelago off the east coast of Sulawesi, Indonesia, and is fished throughout its range. Banggai cardi-nalfish live in groups near long-spined sea urchins and seek shelter in the urchins when threatened. Fishermen take advantage of this behavior by pushing urchins into a cage with a stick, which tricks the fish into swimming right in after them. The researchers monitored the Banggai cardinalfish at eight sites in the archipelago and interviewed local fishermen to assess the fishing intensity, which ranged from low (never or rarely fished) to high (frequently fished).

Kolm and Berglund found that fishing cut the size of Banggai cardi-nalfish groups by half. Specifically, while the average number of fish per group was 11.5 at low-intensity fishing sites, it was only 5.7 at high-intensity fishing sites. This is troubling because at the time of the study, the species had been commercially fished for only 6 years and the industry is still expanding. “Our data suggest that the popular Banggai cardinalfish is under threat from the aquarium trade industry,” say the researchers.

There is, however, an easy way to turn this into a win-win situation for both the fish and the fishermen. Banggai cardinalfish can be raised reliably and cheaply in aquariums, and the researchers are currently working to encourage local people to do so. “A fruitful industry could be developed with little or no negative impact on the Banggai cardinalfish,” say Kolm and Berglund.