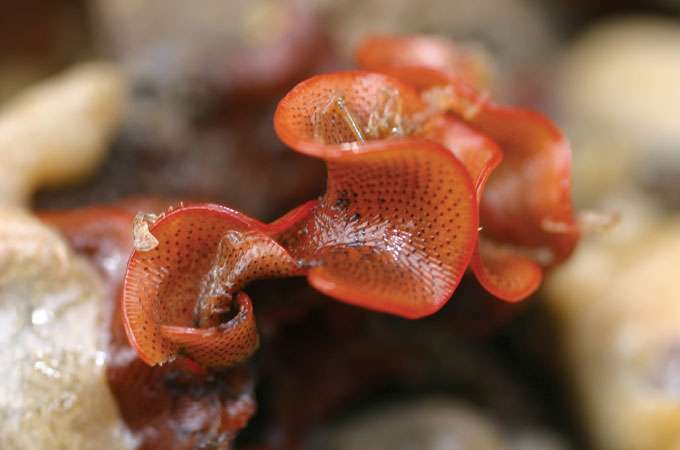 Even Toxic Paint Doesn’t Stop the Spread of Marine Nonnatives

Toxic paint may not be enough to keep boats from spreading nonnative marine species around the world. The bryozoan Watersipora subtorquata can grow on toxic paint, and new research shows that colonies of this tiny marine animal can support — and presumably transport — many other species including amphipods, hydroids and worms.

“The occurrence of W. subtorquata in international shipping hubs may facilitate the transport of locally occurring species that may otherwise have been prevented from attaching to ships’ hulls by antifouling paints,” say Oliver Floerl and Graeme Inglis of the National Centre for Aquatic Biodiversity and Biosecurity in Christchurch, New Zealand; and Thomas Pool of the School of Aquatic and Fisheries Sciences at the University of Washington, Seattle, in the December 2004 issue of Ecological Applications.

W. subtorquata has spread to shipping ports worldwide and thrives in the presence of copper and the other toxic heavy metals found in antifouling paints, readily growing on treated structures such as oil rigs and power-plant cooling water intakes. This bryozoan grows in smooth, flat colonies that provide an ideal nontoxic surface for other marine species to grow on, raising the question of whether they could use it to hitchhike from port to port even on boat hulls treated with toxic paint.

Floerl and his colleagues compared the growth of W. subtorquata and other marine species on fiberglass tiles with and without toxic paint in two small marinas in Queensland, Australia. The tiles were identical to the outer surface of boat hulls and were immersed for periods of time characteristic of boat visits to the marinas: 4, 8, and 16 weeks. The researchers also immersed “toxic” and “nontoxic” tiles with mimic bryozoan colonies made of marine filler putty and glass fiber filler; similar mimics had previously been used successfully in studies of barnacles and other marine animals that grow on hard surfaces.

Floerl and his colleagues also made the surprising discovery that toxic paint may boost hitchhiking organisms on W. subtorquata: mimic colonies on toxic tiles had two-to-three times as many hitchhikers as mimic colonies on nontoxic tiles. The researchers speculate that this boost may be due to two factors: first, small amounts of toxicants (such as those drifting from the antifouling paint over the mimic colonies) can make marine invertebrate larvae settle; and second, given the choice, larvae are naturally more likely to settle on the mimic colonies than on the toxic paint. Thus, when growing on boat hulls coated with antifouling paint, W. subtorquata may go beyond passively accumulating hitchhiking organisms to actually attracting them.