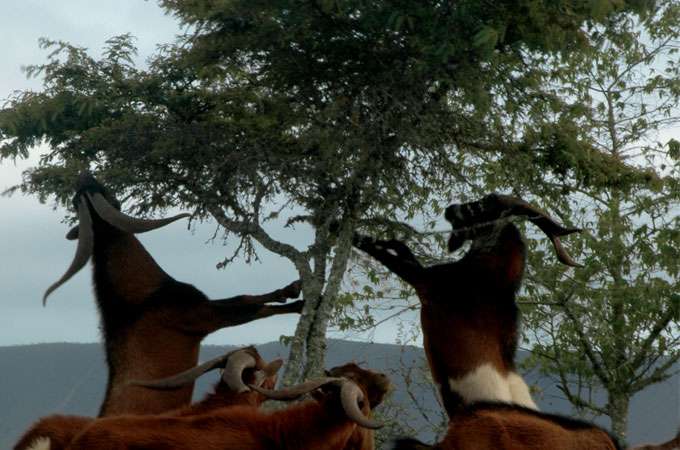 Invasive plants are thought to be so successful because they don’t have natural enemies in their new homes. But new research suggests that the opposite is true. “Exotic plants may thrive not by escaping their native enemies, but by following them,” say John Parker and two coauthors in Science.

The researchers made this discovery by examining from a new angle how herbivores affect invasive plants. Rather than focusing on insect herbivores that favor particular plants, they considered a wide range of herbivores that eat a wide range of plants. The researchers analyzed more than 60 existing studies of how excluding herbivores affected plants. The studies included more than 100 species of exotic plants in habitats ranging from grasslands to forests to lake bottoms, and the herbivores included both natives—from bison to wallabies to fish—and nonnatives—from cattle to rabbits to mollusks.

This work suggests that eradicating exotic herbivores and restoring native generalist herbivores could help control and prevent plant invasions. Moreover, this work provides a solution to the long-standing mystery of why so many plants have invaded the New World from the Old World but not the other way around. The introduction of herbivores has likewise been largely one-way, with Europeans bringing livestock and game animals wherever they went. Moreover, these Old World herbivores have essentially replaced native herbivores in much of the Americas and in Australia and New Zealand, from bison and elk to kangaroos and moas. “Exotic generalist herbivores decimated native, New World plants and paved the way for invasions of Old World plants that were adapted to these herbivores,” says Parker, who did this work while at the Georgia Institute of Technology in Atlanta and is now at Cornell University in Ithaca, New York.