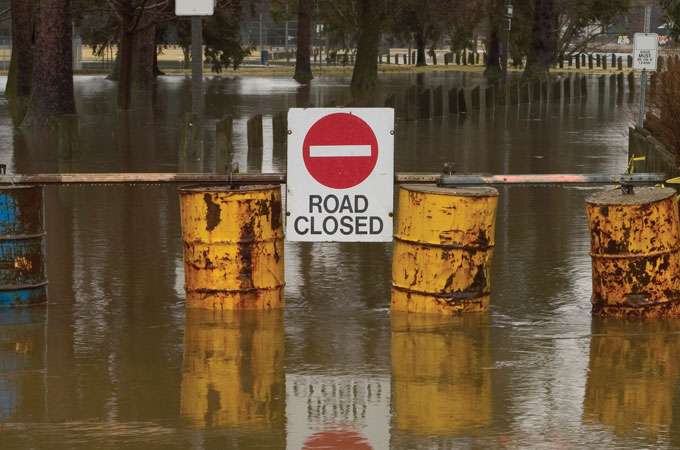 Rightly or not, catastrophic flooding is often viewed as a consequence of poor forest management. The idea that standing forests significantly reduce the frequency and severity of downstream floods provides a powerful incentive for conservation and has spurred forest protection and reforestation programs in developing countries, where the human and economic costs of flooding are often high. But do forests really function as flood regulators on a large scale? A recent study published in Global Change Biology says yes, they do—and it has already touched off renewed debate over a surprisingly controversial issue.

The notion that forests provide natural protection from floods goes back centuries. Most hydrologists agree that on relatively small scales, forested land does indeed soak up rain and limit runoff more effectively than grassland or other cover types. But several influential studies and reports have questioned whether this “sponge” effect is significant over broad regions of mixed land use. Critics say the “natural flood protection” theory is a widely held belief that has never been backed up by much solid data.

To move beyond studies of single-drainage basins, an international team led by Corey Bradshaw of Charles Darwin University in Australia approached the forests-and-floods question from a global perspective. Arguing that general patterns may emerge only at broad spatial scales, Bradshaw’s team examined data for forest cover, flood frequency and severity, and a host of other variables for 56 developing countries from 1990-2000.

The researchers concluded that about 14 percent of the variation in flood frequency between countries could be explained by the extent of natural forest cover. Their statistical model predicts that an additional loss of 10 percent of forest cover would increase flood frequency by 4 to 28 percent. The study also found a somewhat weaker connection between forests and flood severity, as measured in duration, numbers of people killed or displaced, and economic costs. “Our broad-scale evidence should hopefully convince the majority of doubters that there is a link,” Bradshaw said. “Put simply, cutting down native forests leads to more human deaths and damage.”

In a commentary published in Nature, tropical forest ecologist William Laurance wrote that the paper by Bradshaw and colleagues “will turn out to be a landmark study.” (1) While praising its geographical scope and statistical rigor, Laurance also noted one aspect in which the work remains open to criticism. To uncover the strongest statistical signal between floods and forest cover, Bradshaw’s team excluded some of the most massive rainfall events caused by typhoons and cyclones, which typically result in flooding regardless of landscape characteristics.

“Omitting major floods caused by cyclones and hurricanes is a non-trivial shortcoming because it limits the generality of the study,” Laurance said in an interview. “It would be much more powerful if one could say to land managers that forests help to reduce flooding under all circumstances—even for catastrophic floods.”

This point was underlined in a separate letter to Nature by British hydrologist Ian Calder and two others who took issue with Laurance’s generally favorable review. “We argue that [the omission of massive floods] seriously weakens the policy importance of the results,” the authors wrote. “It is these extreme events that matter: economic damage and loss of life grow exponentially with flood magnitude.”

In response to Calder, Bradshaw said his team recently submitted a letter to Nature that includes new analyses, including analyses of 168 extreme floods. “The new data give similar results to the original and support our initial claim,” Bradshaw said. “Keeping native forests intact will, on average, reduce the long-term costs to any government with respect to floods. This is really another hard piece of evidence that native forests are worth more standing than cut down.”