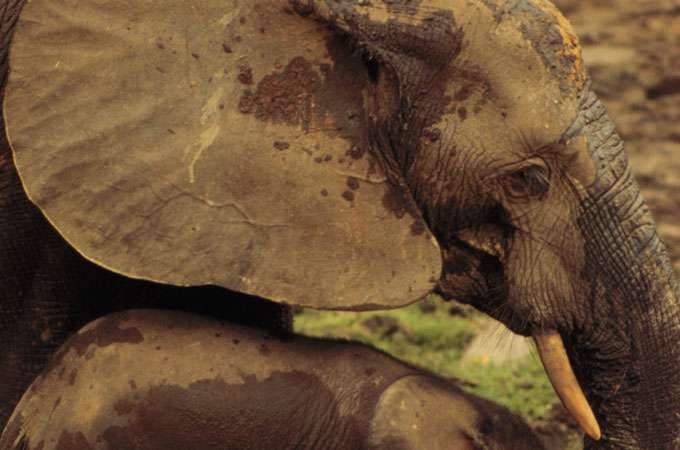 “The frequent repetition of crude guesses has created a false sense that we know more than we really do and has set back conservation of these species,” say Stephen Blake and Simon Hedges of the Wildlife Conservation Society (WCS) in the October issue of Conservation Biology. Blake is the WCS African Forest Elephant Conservation Coordinator, and Hedges is the WCS Asian Elephant Coordinator.

While no one really knows how many forest elephants are left, conservationists believe that they are in serious trouble due to poaching and habitat loss. For example, poaching appears to be common even in Central African national parks, and West African forest elephants have lost more than 90 percent of their range. Similarly, Asian elephants used to live all the way from Iran to India and China but are now found only in scattered populations in South and Southeast Asia.

Most forest elephant surveys are poorly designed, out-of-date, or both. Current survey methods include simply counting the elephants along roads or at water holes, which is not rigorous enough for estimating how many there are in a population. Moreover, “current” estimates for Central West African forest elephants are based on 15-year-old, incomplete data. Worse, the estimate for Asian elephants is 25 years old and even then was little more than an educated guess. “Conservationists and the media have repeated this estimate so often that it has come to be accepted as fact,” say Blake and Hedges.

Unreliable population estimates can misdirect conservation planning. For example, Sumatra’s Bukit Barisan Selatan National Park was not chosen as a priority site for elephant conservation in 1998 because the population was thought to be small. However, a 2001 survey revealed that the park actually has about 500 elephants, making the site critically important to elephant conservation, in part because Sumatra has a subspecies found nowhere else.

Recognizing the need for rigorous forest elephant surveys, a systematic monitoring program was proposed in 1997 by CITES (the Convention on International Trade in Endangered Species of Wild Fauna and Flora). Called MIKE (Monitoring the Illegal Killing of Elephants), the program began in six Central African sites in 2003. Ultimately, MIKE is planned to encompass 55 African and 31 Asian sites.