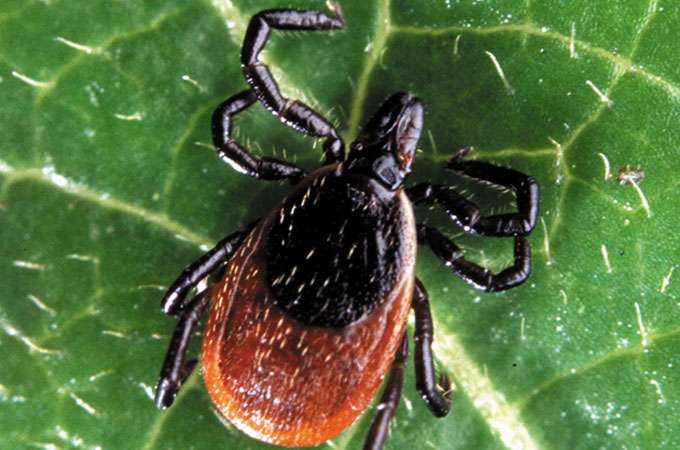 Having a patch of woods in your backyard may boost your spirits but could threaten your health. New research shows that small forest fragments in New York have more Lyme disease-carrying ticks, which could increase peoples’ risk of acquiring the disease.

Although fragments generally have fewer species than do continuous habitats, some species actually do better in small patches. Notably, white-footed mice (Peromyscus leucopus) are more abundant in forest fragments in parts of the U.S., presumably because there are fewer predators and competitors left. White-footed mice are particularly abundant in fragments smaller than about two hectares, and this could mean trouble for people living nearby because the mice are the main carriers of Lyme bacteria. In eastern and central North America, people catch Lyme disease via blacklegged ticks (Ixodes scapularis): first, larval ticks feed on infected mice, and then the infected larvae molt into nymphs that bite people.

The incidence of Lyme disease is rising in the U.S. and is far more common than West Nile virus and other mosquito-borne diseases.

To see if forest fragmentation could increase the risk of Lyme disease, Keesing and her colleagues studied blacklegged tick nymphs in 14 forest patches ranging from 0.7 to about 7 hectares in Dutchess County, New York, which recently has reported the most people with Lyme disease in the U.S. The researchers determined the densities of both tick nymphs and infected tick nymphs.

The researchers found that smaller forest fragments had both more tick nymphs and more infected tick nymphs, which could mean more Lyme disease. Fragments that were smaller than one hectare had an average of three times as many total nymphs as the larger fragments did (0.1 vs 0.03 nymphs per study plot) and seven times more infected nymphs (0.07 vs 0.01 infected nymphs per study plot). As many as 80 percent of the nymphs were infected in the smallest patches, the highest rate the researchers have seen.

“Our results suggest that efforts to reduce the risk of Lyme disease should be directed toward decreasing fragmentation of the deciduous forests of the northeastern United States into small patches, particularly in areas with a high incidence of Lyme disease,” say Keesing and her colleagues.