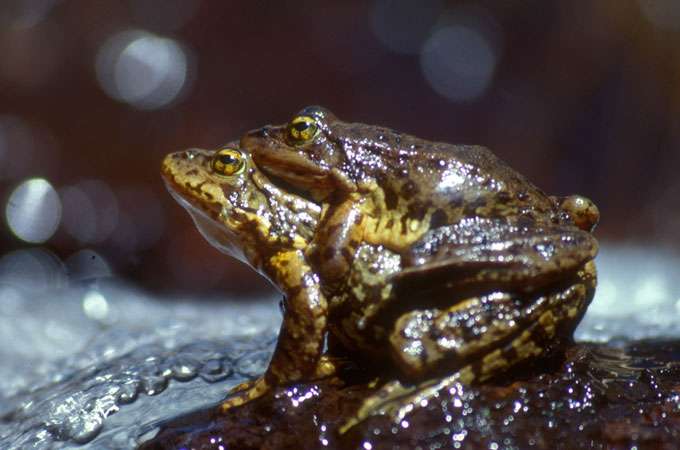 One of the mysteries of global amphibian decline is that many affected populations are in protected areas. Although biologists suspect that introduced predatory fish may be the culprit in the decline of mountain frogs, there has been little evidence that the two are directly linked. Now new research shows that mountain yellow-legged frogs (Rana mucosa) rebound when trout are removed from lakes in California’s Sierra Nevada mountain range.

“Removal of introduced trout resulted in rapid recovery of frog populations,” says Vance Vredenburg of the University of California, Berkeley, in the May 18 issue of Proceedings of the National Academy of Sciences.

Once abundant, the mountain yellow-legged frog population has declined to the point that three of the four genetically distinct groups are nearly extinct. The high-elevation lakes where the frog lives had no fish until trout were introduced in the late 1800s via mule train for sport fishing. Trout introductions accelerated in the 1950s and 1960s, when government agencies began dropping fingerlings from airplanes, and today most of the frog’s habitat contains trout. But even so, these voracious predators have not been the leading suspect in the frog’s decline, partly because the severest declines were documented almost a century after their initial introduction.

Vredenburg compared the numbers of mountain yellow-legged frogs in lakes with and without trout in Sixty Lake Basin in Kings Canyon National Park, a remote wilderness area that has one of the largest remaining populations of the frogs. Of the 50 lakes surveyed, 30 were fishless and 20 had trout.

To test whether the trout have a direct effect on the frogs, Vredenburg used gill nets to remove trout from five lakes. A year later, these “removal” lakes had more than 10 times as many frogs and nearly 80 times as many tadpoles as trout lakes. Three years after trout removal, these lakes had essentially the same numbers of frogs and tadpoles as fishless lakes.

To confirm that trout eat tadpoles, Vredenburg put trout into enclosures in three fishless lakes and observed the egg masses that frogs deposited there. None of the tadpoles that hatched in the trout enclosures were found alive at the end of the experiment. “Trout did not attack egg masses but struck at and consumed tadpoles as they hatched,” says Vredenburg.

This work has spurred trout removal from some California mountain lakes. “The National Park Service has 11 ongoing removal lakes in Sequoia and Kings Canyon National Parks, and the California Department of Fish and Game — the very agency that still introduces trout in some areas — is removing trout in 21 lakes in the Inyo National Forest,” says Vredenburg.

His findings could also apply to other naturally fishless mountainous areas where trout have been introduced and frogs have declined, including areas in Australia, Costa Rica, and Spain. “Nonnative predators such as salmonid fishes are commonly introduced into aquatic ecosystems by humans, even in ‘protected’ areas, and therefore may be an important factor in worldwide amphibian declines,” says Vredenburg.